A Quick & Easy Guide to the World Humanitarian Summit 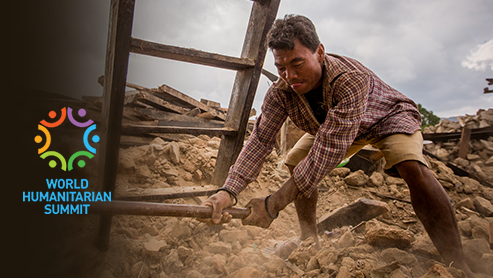 The World Humanitarian Summit will be held in 2016, and its focus is on innovative ways to respond to the growing humanitarian needs in the country. We explain what it’s all about and why Islamic Relief has been involved in the process from the beginning.

Q: What is the World Humanitarian Summit all about?

A: The World Humanitarian Summit is an initiative from UN Secretary-General Ban Ki-Moon and the first summit will be held from 23-24 May 2016. The summit will bring together governments, humanitarian organisations, people affected by conflict and disaster, and partners including the private sector.

The aim of the World Humanitarian Summit is to set actions and commitments so countries and communities can prepare for emergencies, respond to them, and be more resilient to the effects of them. Organisations will be encouraged to forge new partnerships and launch new initiatives, and showcase innovation. The overall goal is to reduce people’s suffering.

Q: You’ve just said this is the first time it’s been held. Why now?

The money spent is indicative of just how many people needed humanitarian support. There is no exact data on the number of people affected by disaster or conflict, but figures from Development Initiatives indicate that in 2014 more than 58 million people had to flee from violence, while 107.3 million people (source: CRED) were affected by disasters such as typhoons or earthquakes.

It is clearly time to bring people together to discuss the growing needs and whether, globally, everybody is responding in the best way.

Q: What in particular will be discussed at the World Humanitarian Summit?

A: There are plenty of topics that could be discussed, from safe humanitarian space all the way to accountability, but the summit is focusing on five “core responsibilities”:

Q: When is the World Humanitarian Summit, and what difference will it make?

A: The summit is being held from 23-24 May in Istanbul. It is expected to be a platform for new transformative solutions. A new strategic agenda will be drawn up, and, after the summit, this will be turned into a set of actions helping people, communities and countries be better prepared for crises.

Q: Why is it relevant to Islamic Relief’s work?

A: Islamic Relief was set up in 1984 in response to humanitarian need in Sudan. As an organisation, we have responded to many humanitarian emergencies from the Bosnia war, to natural disasters in Haiti, The Philippines, Nepal, and Pakistan, among others.

In 2014, 75 per cent of our annual charitable expenditure was spent on humanitarian needs, including in Iraq, Myanmar, Bangladesh and Syria. We constantly look for ways to help our growing income reach more people in the best ways.

Q: What is Islamic Relief’s involvement in the World Humanitarian Summit?

A: Islamic Relief has taken many opportunities to collect the views of people it works with across the world, and to feed these views into the World Humanitarian Summit consultations.

Imran Madden talking to the group

Islamic Relief and The Humanitarian Forum have been working together to prepare for the summit. Both organisations are interested in framing Muslim-based humanitarian actions. Together we have organised 16 national consultations in Yemen, Tunisia, Jordan, Somalia, Uganda, Ethiopia, Kenya, South Sudan, South Africa, Italy, Norway, Canada, Bangladesh, Sri Lanka, Afghanistan and Germany.

Islamic Relief was invited to become a member of the South and Central Asia Regional Steering Group, and helped organise the regional consultation in Dushanbe, Tajikistan, in July 2015. The group continues to meet. We also participated in the European consultation in Budapest in February 2015, and the global consultation in Geneva in November 2015.

In terms of the summit itself, Islamic Relief plans to focus on faith-based action, climate change, and Islamic financing.

Q: What do the Qur’an and Prophet Muhammad (PBUH) say about humanitarian aid?

A: In Islam, humanitarianism is a very broad concept that includes traditional form of charity – including what is now understood as humanitarian aid – and acts of kindness. The Islamic concept of humanitarianism means people are not divided into rich givers and poor receivers, but instead all have the capacity to do good.

“A man who fills his stomach while his neighbour is hungry is not a believer.” (al-Tabarani 751)

“They ask you, (Oh Muhammad), what they should spend (in charity). Say: That which you spend for good (must go) to parents and near kindred and orphans and the needy and the wayfarer. And whatsoever good you do; Lo! Allah is Aware of it.” (al-Baqarah 2:215)

“And in their wealth was given the right of the needy and deprived” (adh-Dhariyat 51:19)