‘How to challenge and change a social norm, sexual and gender-based violence, masculinities, and leadership’

Making the case that faith is a central part of the social fabric in communities in which we work, she argued that whilst tackling social norm change to address domestic violence and gender-based violence (GBV) we need to recognise the religious concerns of individuals and local communities as being integral to their identity and wellbeing.

Mousumi highlighted the intersection of faith and gender, which sometimes is used negatively to perpetuate the patriarchal norms and binary understanding of gender but which also has potential to be a part of the change narrative. She stressed the key role that faith leaders play in changing social norms due to the pre-existing reservoir of trust they have in their communities; and highlighted our work with faith leaders as an example – how using a behaviour change methodology based on ‘Channels of Hope’ in Lebanon, Mali and Pakistan, faith leaders are trained to become champions and agents of change in addressing GBV, including domestic violence.

This event was jointly held with:

‘In search of a round table: Gender, religion and decision-making in public life’

With over 300 attendees, the CSW side event, was jointly organised by Ministry of Foreign Affairs of Denmark, Federal Ministry for Economic Cooperation and Development (BMZ) Germany, Global Affairs Canada (GAC), PaRD and others.

It tackled a challenging topic: the role of religion in pushing for gender equality, and the enormous responsibility of faith-based organisations to smooth out the animosity and scepticism that between both areas.

Opening the session, Denmark’s Special Representative for Freedom of Religion or Belief, Ambassador, Michael Suhr pushed for “cross-fertilisation” between gender and religion, and underlined the need for a partnership between human rights and gender equality, underling the need for both sides to sit together at the “round table”.

Shahin Ashraf, our Head of Global Advocacy, underlined the critical elements that are required to achieve and maintain greater diversity at the decision-making table. She argued that despite research showing that inclusive teams make better business decisions and deliver faster results, women still remain underrepresented in positions of power. Furthermore, key to the intersectionality debate is to not leave any groups behind. According to Shahin, “when any group – colour, race, or religion is left out, the whole boat sinks.”

While non-governmental organisations spend a considerable amount of time developing policies, procedures and reports, the panel asked: ‘Do we walk the talk?’ i.e. critically reflect on what is and is not working to tackle violence against women and girls (VAWG) and the promotion of gender equality in the work that we do.

In this co-hosted event moderated by Reyhana Patel, Head of Communications and Government Relations for Islamic Relief Canada, Najah Almugahed, Gender, Inclusion and Protection Advisor spoke alongside experts from, Elrha, Action Aid, and the Rwanda Girl Guides Association to answer this question.

The session started with a summary of the gaps within GBV programming for emergencies, as found in Elrha’s “Gap Analysis” research. The gaps identified, such as the need for better engagement with women and girls, the need for better analysis and use of programmatic data to better evidence and assess impact of a programme and inform design of future programmes, as well as lack of flexible funding were discussed.

Najah also shared lessons from Islamic Relief’s ‘Achieving gender justice: An Islamic Relief review’, an internal review conducted in March 2020 to better understand our own gaps with regard to gender equality. Among the lessons are reflections on the importance of words i.e. a definition of gender equality as a conceptual term, with markers that are understood and accepted not only at the global level but down to country offices and programmatic levels.

Another relates to contextualization: while each country/region differs, there needs to be a minimum standard applicable to all. Concurring with these lessons, ActionAid’s ‘VAWG Evidence and Learning Review’ – which it conducted internally in December 2019 – underlines how accountability is crucial to ensure that the process remains ongoing. Action Aid also highlighted the need for greater and more flexible funding to ensure that gender equality commitments can be met.

One of the examples shared during the session was from Pascaline Umulisa, Executive Secretary from the Rwanda Girl Guides Association, on “Speak Out!”, a 4-year project funded by the UK’s Foreign, Commonwealth & Development Office (FCDO). She highlighted the programmes’ success in making a difference in the lives of girls in Rwanda, attributing this to the context-specific design of the programme, in which feedback mechanisms ensured that the voices of each project partners are heard and acted on. 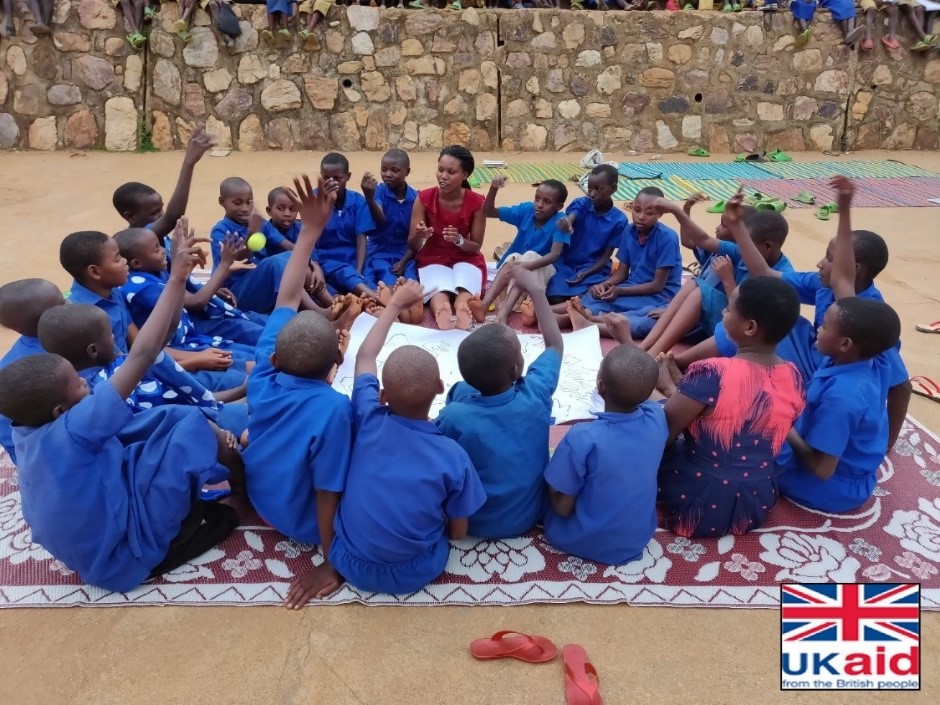 An activity organised by the “Speak Out!” project, jointly implemented by Rwanda Girls, Action Aid Rwanda and the Faith Victory Association. The project focused on the sexual, reproductive and health rights education of girls, and helped girls identify and avoid different kinds of harassment in society.

‘In dialogue with faith and rights for gender equality’

The session aimed to bridge discussions between rights-based, feminist, religious and secular advocates who are working for gender justice. It showcased existing collaborations between religious and faith-based organisations and rights-based organisations. In this session, Shahin Ashraf challenged the “presumed incompatibility of faith and human rights and Western values”.

She underlined what human rights mean to her: “I see human rights as the struggles of ordinary people to hold those in power to account”. Shahin cautioned against shifting blame on any religion as source of human rights violations, which she termed as far too simplistic and naïve an understanding. She also called for the inclusion of faith voices in human rights debates, as this will strengthen it further.

This event was jointly held with:

Islamic Relief, with funding from Sida, the Swedish International Development Agency (SIDA), has been using a triple nexus approach to tackle issues of insecurity some countries. Working in Kenya, Pakistan, Indonesia and the Philippines, we are supporting local risk and development planning, improving governance, enhancing livelihoods for at-risk youth and vulnerable women, and boosting community social cohesion. The programme focuses on inclusion of women and youth in particular, and some of the amazing women who are active peacebuilders in their local communities presented their work in this session.

In pre-recorded videos, Ms A* from Pakistan and Baiali Kasim, President of the Kalipapa Women and Youth Association, in the Philippines, spoke of their work to build social cohesion and prevent conflict in their communities. They also highlighted how they manage male acceptance of their public roles in community peacebuilding while building bridges with other women from different communities. They stressed the need for continued support to women peacebuilders to build up their knowledge and skills on conflict prevention and dispute resolution. 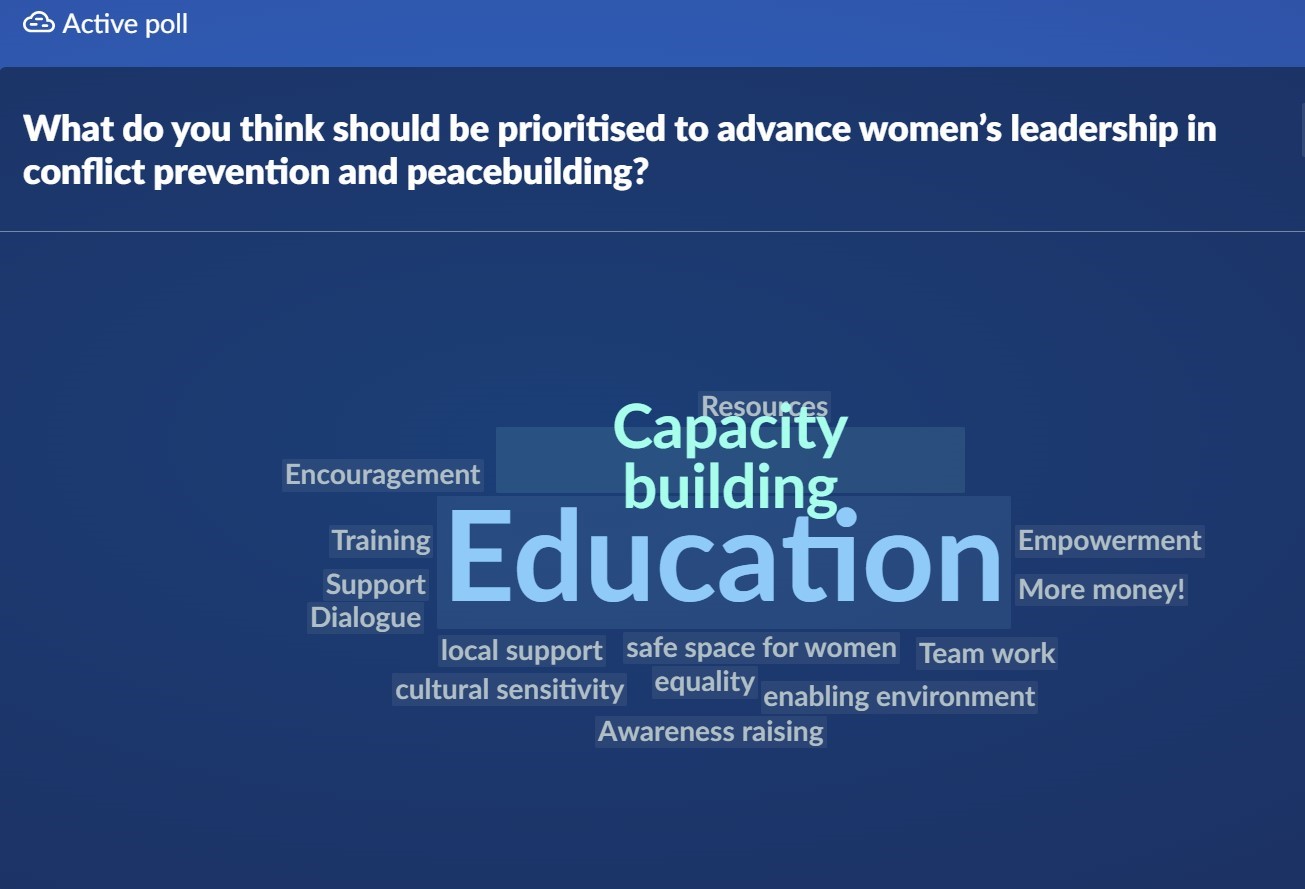 The results of the 2 polls we ran during the session. We asked the audience what they see as the biggest challenge to the advancement of women in peacebuilding, and what they thought should be prioritised to advance women’s leadership in conflict prevention and peacebuilding. 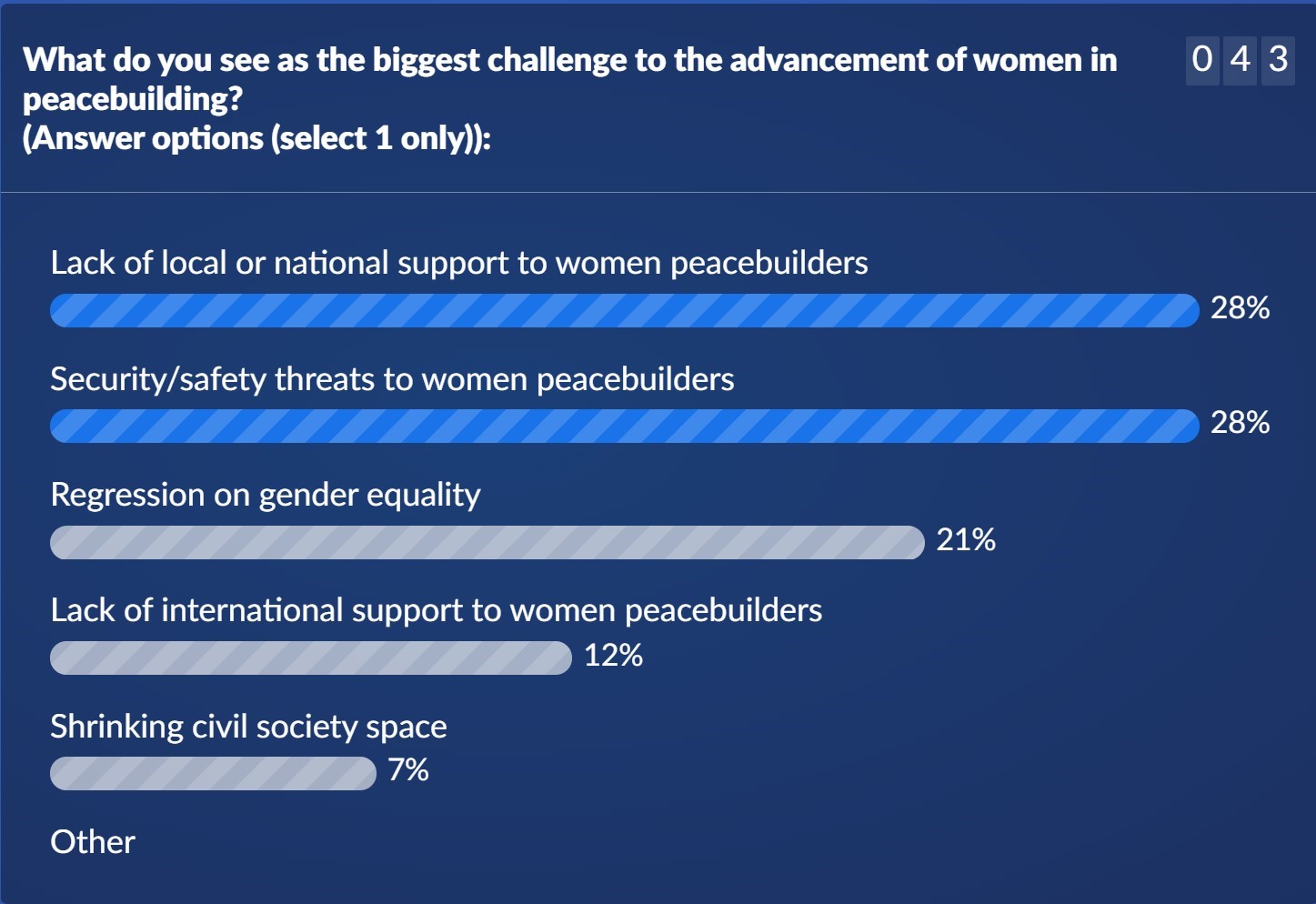 *We have protected Ms A’s identity to ensure her safety.