Islam is considered to be the Philippines’ second largest religion, with over five million adherents across all of its islands. This year, Islamic Relief Philippines conducted their first Ramadan distribution programme, delivering food packs to the Philippines’ most vulnerable communities.

We asked Sandra Borgueta, IR Philippines’ Communications and Advocacy Officer, to tell us about her experience visiting Pagalungan, Maguindanao – a municipality with one of the largest Muslim populations.

Pagalungan is a 90 minute drive from Cotabato City.

It is an incredibly weather-sensitive area, prone to severe flooding due to its low-lying environment and drought because of the country’s tropical climate. During monsoons, Rio Grande de Mindanao and Liguasan marshes tend to overflow and only late last year the entire province of Maguindanao suffered from drought. These extreme conditions make life difficult for the 10,401 households in the municipality that rely on farming and fishing as their main source of income. Constant violent clashes from deep-rooted clan wars have also worsened living conditions in the area. 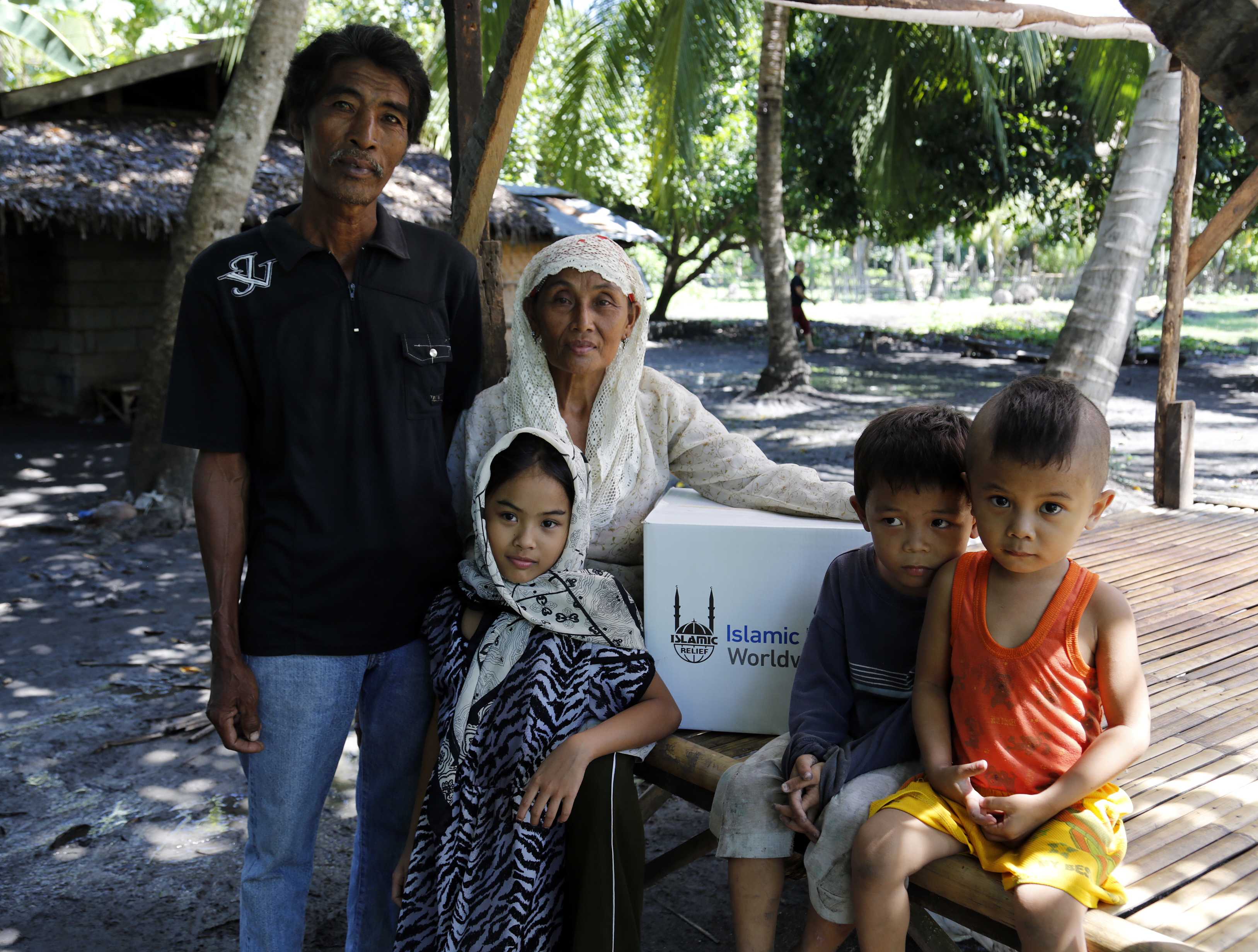 Samia Batua and her family at their home in Galakit, Pagalungan.

When I first met Samia Batua, she was standing in line to collect her food pack. Her husband had to work at their farm so she was accompanied by her neighbours – mostly women. With five children to support, she spoke proudly of the four that had recently finished college. “We borrowed a lot of money for college. I am now P300,000* in debt,” she told me with a sigh. “I don’t mind this problem, though, as long as they all finish school. It was important for them to get an education.” When I asked her how she hoped to pay off her loans, she said she didn’t know.

Samia is just one of the many mothers I met in Pagalungan with a similar story.

Down the fields and across the rivers

My team asked if I was willing to cross a river to go visit more of Pagalungan’s Muslim community. I was used to 30 minute boat rides and wasn’t afraid of water, and so I jumped at the chance. The next day, however, I found out that it wasn’t just a matter of crossing – we were on the boat for five hours. The households we were to interview were along the famous Liguasan marsh. It would take a little more than two hours to travel back and forth just to visit the first few homes.

The locals call it “Marshland.” This is because houses sit on small patches of land and are waters apart from one another. Ideally, we hoped the interviews would take three to four minutes per home, but since we were rowing one house after another, we spent ten to 15 minutes at just one stop. In three hours, we only managed to interview 20 families.

The next day was a lot more fruitful. We travelled into another village where houses were deep inside fields and that meant trekking by foot. The drought had only recently cleared up and the community was enjoying the rain, with water flowing from the fields and into some of the houses. We spent five days interviewing over two thousand families and delivering food packs.

During the interviews, we would ask for identification cards to make sure that we were speaking with locals belonging to the right community. Almost all of them did not have their IDs with them because they were still at evacuation centres, internally displaced due to their fields drying up or being flooded, or to escape conflict.

We met Imam Guiamed Nur from the village of Bago-enged. He had been living in a community hut for four weeks since violent clashes erupted in his village. “There is a clan feud and people with guns were firing at each other. We had to run away,” he told us. His family shares the evacuation centre with four other familes. Even amidst the violence and hardships that they experience, Imam Guiamed said that Ramadan is a time for forgiveness and that they pray for peace in their land. “Fasting in the holy month of Ramadan is a time when we seek forgiveness from Allah (swt) for our past sins. [To fast] is an obligation that we Muslims have to do so that we can reap the rewards in the afterlife.” This story is not uncommon in Pagalungan, where most families can go hungry for days because they have no stable income. 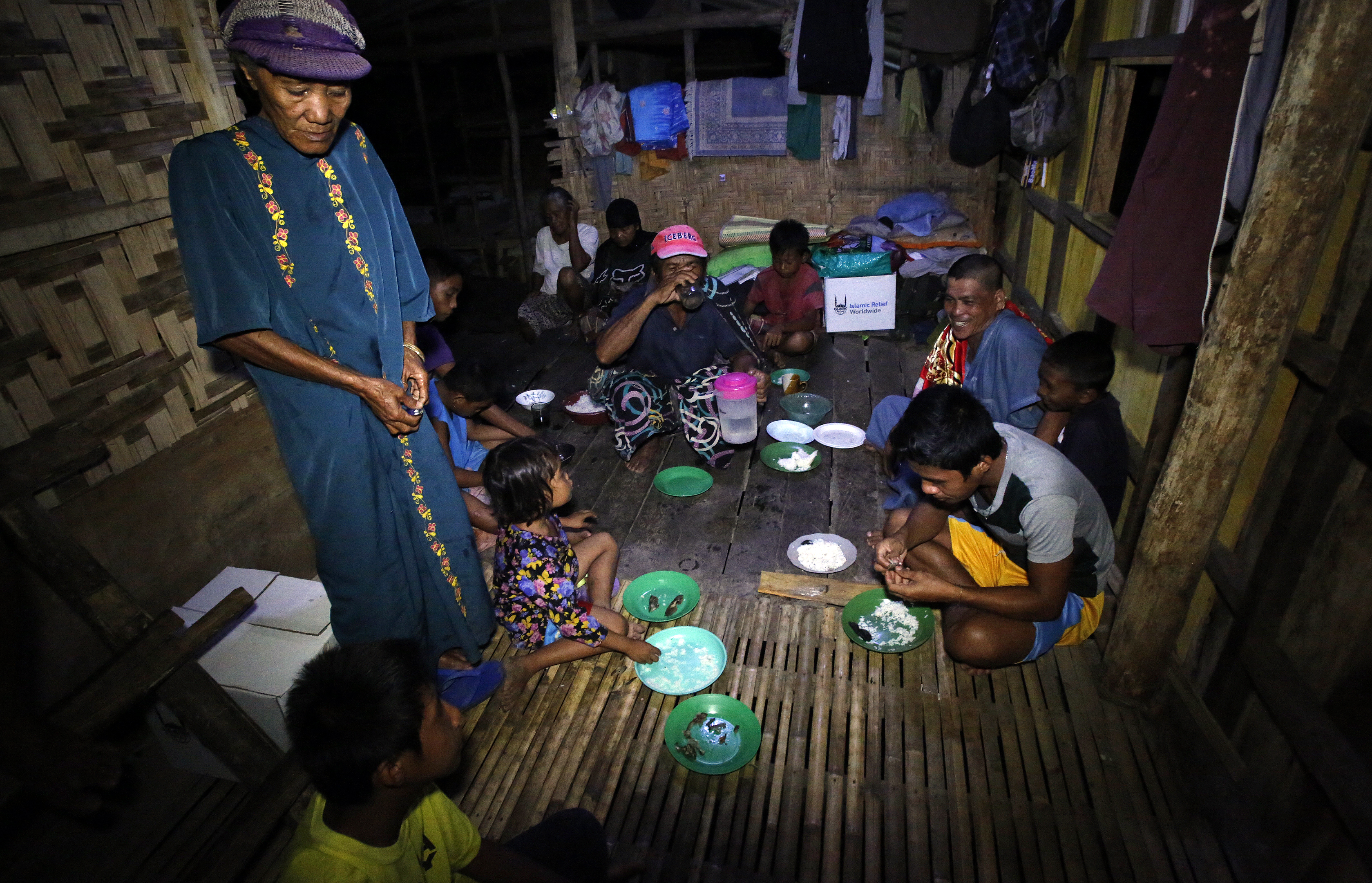 Imam Guiamed Nur sits with his neighbours in their community hut to break fast together.

Imam Guiamed was among those who received a food pack and he was so grateful for the support that was given to them. “We were able to have kanduli (feast) and we shared our food with the others here in the community who could not prepare iftar,” he said. “We pray that those who have come to help us are given more blessings so they can help more people like us.” It continues to amaze me that even with the little they received, Imam Guiamed felt generous enough to share his food with his neighbours.

Jasmin Salazar, a farmer from Galakit, said that most families in her community would depend on their own vegetable gardens. “Our farms have dried up because of the drought, so we try to plant some vegetables so at least we have something to eat,” she told us. The food pack meant Jasmin and her family did not need to worry about where to get food for Iftar anymore. “You risked your lives to be here with us when other people would be afraid, may Allah (swt) continue to bless your heart and spirit.”

I was there for a mere 15 days, but what I have witnessed will continue to inspire me and the work that I do with Islamic Relief. As a Catholic, I relate to Ramadan as a journey of sincere contemplation, where we seek clarity of our faith and our purpose as stewards of good. I feel privileged to have been part of the IR Philippines team in Pagalungan who worked so hard to make this activity the success that it was.