Bamako residents speak out in aftermath of Mali flash flooding

Just weeks ago, Ba Lamine Traore was carried from his flooded bedroom in Mali’s capital city. Here, he and others talk about their experience of flash flooding and the lifeline Islamic Relief provided in the aftermath.

Heavy rainfall, which began on 16 May, triggered devastating flash floods in Bamako city. Over a dozen people lost their lives in the deluge, which also damaged and destroyed homes.

“When the disaster happened, I was powerless. I was sitting on my bed. I was completely submerged by water,” says Ba Lamine Traore.

His landlord, Moussa Diakite, explains that mobility problems had left the eighty-year old unable to escape his bedroom as it flooded.

“Water rose above my waist, so my children came and carried me out,” adds Ba Lamine Traore, who lost his stock of food to the floodwaters. “It caused so much damage. Even today I am still suffering from this disaster, I swear to God.”

Islamic Relief, one of just a handful of humanitarian organisations operating in the area, was there to assist Ba Lamine Traore.

His household was one of 368 that received money to buy food supplies and items like soap, clothing, and cooking utensils through an intervention backed by the START Fund.

“We lost all our food stocks,” says Awa Diarra, who is also aged 80 and received cash support. “[With the] money I have received I am going to buy millet, rice, soap, clothes and oil.”

The disaster wreaked food supplies and clothing belonging to Yoru Doumbia’s family. It also damaged parts of their house.

“[The assistance] will help me with my children’s school fees. I will buy food, clothes, and anything that I lost which I can afford [to replace],” he says. 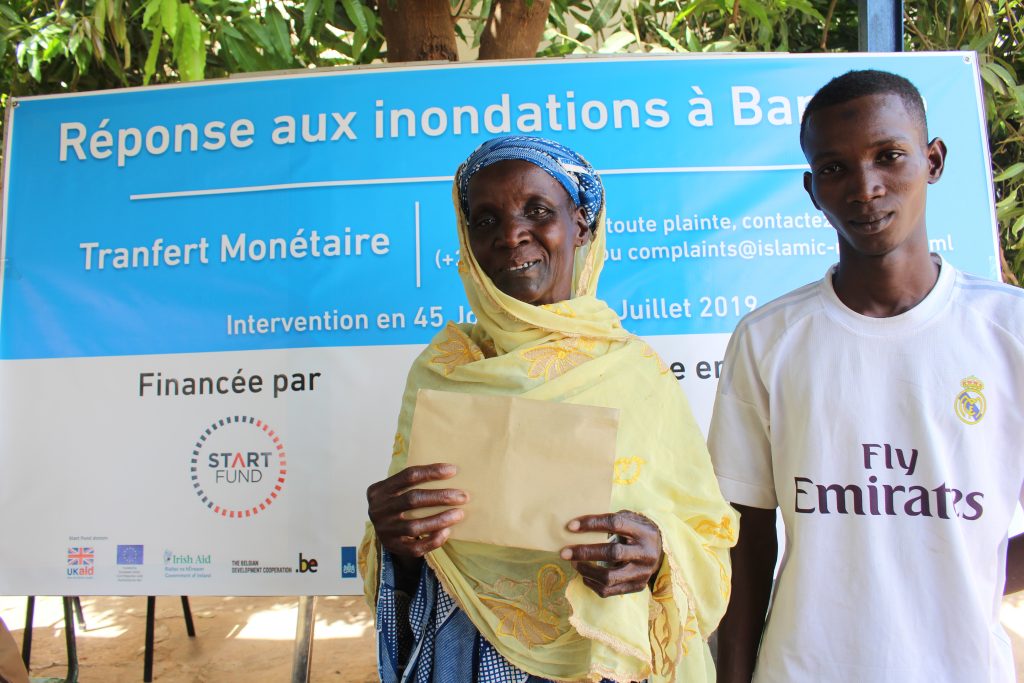 Awa Diarra receiving her money, with which she has replaced her family’s food stocks.

As well as empowering vulnerable families to meet their urgent needs in the aftermath of the disaster, Islamic Relief is working to safeguard vulnerable people.

By delivering workshops offering faith-based perspectives on child protection and gender based violence, we are equipping local people to bring about lasting positive change in their communities.

Flooding is common in Mali. A country on the frontlines of climate change, floods and droughts are lasting longer and its people face growing challenges as resources shrink.

Islamic Relief has been working in Mali since 1997. We provide lifesaving aid and transformative development projects in the north, south, and central areas surrounding Bamako.