Some of the poorest people in Bangladesh have lifted themselves out of extreme poverty while developing resilience against climate change thanks to Islamic Relief’s help.

Bangladesh is one of the most vulnerable countries to climate change, as well as one of the most disaster-prone. Its people are used to annual floods and frequent cyclones, but climate change is bringing rising sea levels, higher temperatures, lower rainfall and unpredictable extreme weather to add to their challenges.

Two-thirds of the country is less than five metres above sea level. Rising sea levels are eroding low-lying land from under the feet of poor coastal communities, such as those in Tazumuddin on the island of Bhola – home to Shahabuddin, his wife Hosneara, and their three sons.

“We had vast land and properties,” says Shahabuddin. “But the river Meghna engulfed all of our properties in a few days.”

He becomes visibly distressed as he recalls his family’s vulnerability in the aftermath. With no house, no land and no income to feed themselves, the family became destitute and went to live with a relative. 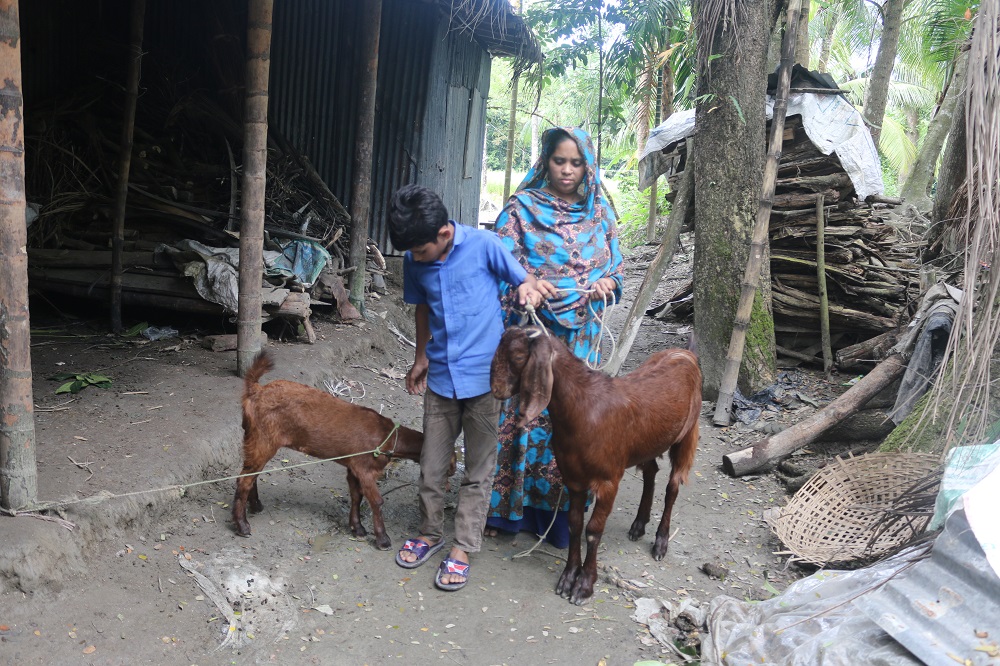 Hosneara and her son with some of their goats, purchased through taking part in an integrated Islamic Relief project.

People in extreme poverty struggle with a lack of food, clean water and sanitation. They are excluded from social services, education and healthcare. All of this leaves them especially vulnerable to destructive environmental forces.

Four years ago, Islamic Relief began working with extremely poor families – particularly those in which women were the main breadwinner – in Tazumuddin. By simultaneously working on different areas of need, we enhanced family incomes, enabled children to go to school, and met basic needs such as food, safe water and sanitation.

Hosneara joined the Indronarayanpur Swanirvar Dal, the self-help group Islamic Relief established in her village. She began depositing small savings and a musti, a handful, of rice in their food bank and received all the support the project offered, including cash for work for building their own homestead, a toilet, small business training, vegetable seeds and fruit saplings, and education materials for her children. 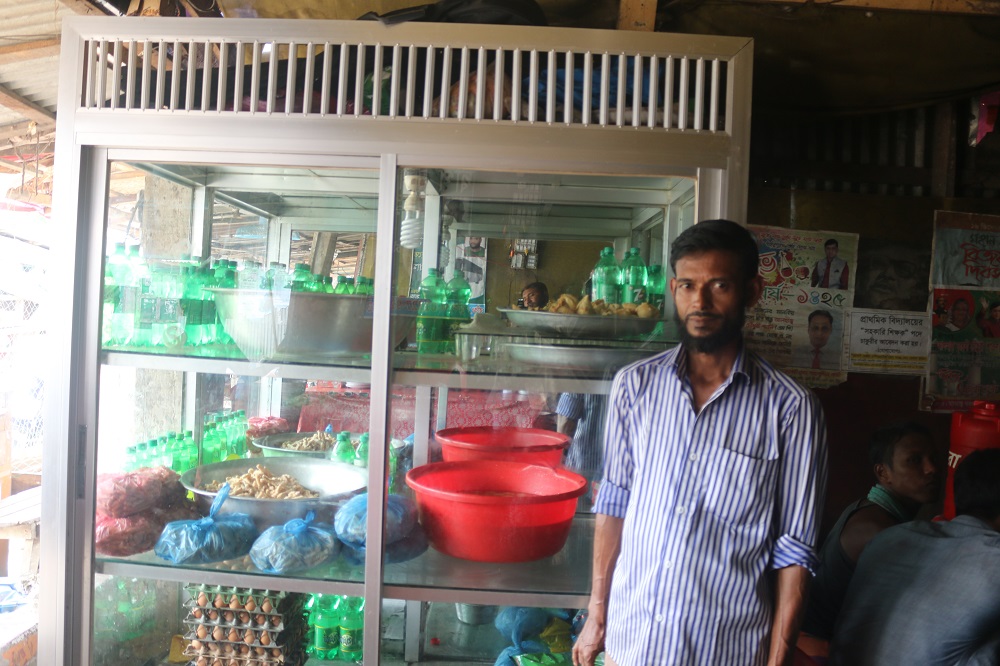 Shahabuddin and his wife have grown their tea stall into a thriving small restaurant.

Hosneara was eager to learn and received training on reducing risk during disasters, climate change adaptation, water and sanitation, livestock and business training and social issues such as early marriage.

By applying for an interest-free loan from the savings fund, she was able to start a successful tea stall with her husband. Soon she was able to repay the loan and take out further loans to establish a goat-rearing business and other small seasonal enterprises.

“Participating in the project, we now eat three times a day and are content,” said Hosneara. She can also afford to send her three boys to school, fulfilling her dream to educate her children.

Hosneara and Shahabuddin’s tea stall has grown into a small, thriving restaurant, and the family were recently able to buy 56 decimals (half an acre) of land. The couple can now meet all of their family’s needs and plan for a brighter future. None of this would have been possible without Hosneara’s determination, hard work and support from Islamic Relief.

“Islamic Relief Bangladesh helped me to dream of a poverty-free life,” says Hosneara. Her new dream is to buy a piece of land and build a house far away from the river that swallowed her old home.