In South Asia and many other impoverished parts of the world, there are millions of people trapped in bonded labour, which is also known as debt bondage or debt slavery. It is the most common but least known form of modern day slavery.

People experiencing forced labour often become subject to debt bondage, in which they are trapped in a cycle of labour. It usually begins when poor people have no choice but to take a loan or wage advance from their employer or member of the community to cover emergency or major expenditures such as dowries. They subsequently find it impossible to repay the loan for a combination of reasons, including high interest rates and low pay. Often they are forced to work in harsh conditions.

All three of Kiran’s sons are survivors of child labour. The mother-of-four, who lives in Nepal’s Rauthat district, tells her story.

“I cannot read and write. My parents could not afford to send us all to school, so they chose to send my eldest brother.

“I got married when I was 14, my husband was 19. My parents could not afford the dowry for an educated and economically stable man, so they arranged for me to marry my husband who is also illiterate and comes from a poor family.

“We struggled a lot, particularly during and after my pregnancies. There were times we did not have enough food and water. I became very sick and I could not produce enough milk, so we had to give the baby formula milk. The children were very weak and sick because there was not enough food. I often went hungry so that I could feed my children. The hospital was very far away and we could not afford take them to hospital.

“Things started to improve when my husband began working at the brick factory and he started to earn a bit of money – but it still was not enough to cover everything we needed. Then my three sons started working at brick factories. 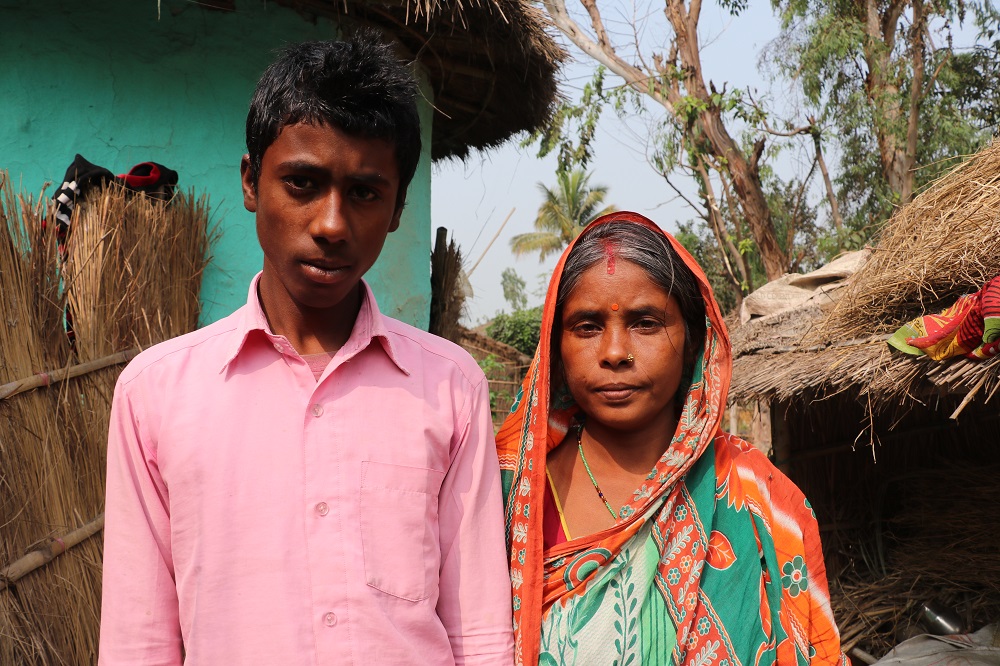 Kirin with her youngest son, Sang*, 14, who was working three jobs to help his family make ends meet.

“Manish worked in a brick factory in Kerala, India. He worked very long hours, often with little food and he didn’t always get enough money to send home. He had a lot of debt to pay back so he worked a lot to try and pay it back but the interest rate was very high. He ran away from the factory and when he came back to home he was very thin and weak. He is still very sick and he can’t work anymore so he stays at home. As a mother, it makes me very sad. It is difficult for me to see him in this condition.

“My daughter’s husband has started having an affair and is no longer engaged in improving the marriage but he does not want to divorce my daughter. We are planning to file a case so that we can get the divorce and get the dowry back from her husband. I want my daughter to remarry but we cannot afford the dowry, we need to first get 200,000 dowry back from her current husband. It’s a very difficult situation.

“Women in this community suffer a lot. A lot of us are illiterate, we cannot inherit property and we only get financial support through our husbands. I want to see a lot of changes, I want more job opportunities for women so they can become financially independent. A lot of women suffer health complications especially during birth because all the health centres and hospitals are far away or they cannot afford it.”

Kirin has found a lifeline through our project with local partner the Rural Development Centre. Working together to reduce child labour and human trafficking, we’re supporting vulnerable families like Kirin’s. Her youngest son, Sang*, is receiving skill-based training designed to help him build a future free from exploitation and poverty.

Donate now to support our life-changing work in Nepal and around the world.