Islamic Relief has distributed tents and food to families in the outskirts of Kathmandu, Nepal.

Members of our Disaster Response Team travelled to Sindupalchowk district, where they provided tents to 261 families, and food to 279 families.

More than 60,000 homes, which is roughly equivalent to 98 per cent, have been destroyed in Sindupalchowk, north east of Kathmandu. The area is at risk of further landslides and parts of the district are cut off from the city by debris and landslides which have blocked roads. Latest figures estimate that 273,976 – 96 per cent – of the population of Sindupalchowk have been directly affected by the two earthquakes.

Among those helped was Bal Kumari Dahal, 60, whose house was destroyed in the earthquake.

“When the earthquake struck, she was out working in the field and so remained safe,” said Haseeb Khalid, from Islamic Relief’s Disaster Response Team. “Her house was destroyed.

“We carried her tent on our shoulders to her land. We pitched her tent, using it as a demonstration session to show people how to pitch these tents.”

Islamic Relief is continuing to distribute essential items, including 714 tents and 4,500 food packs, to those who have been affected by the two earthquakes that struck Nepal. Each food parcel, which is designed to last a family of five a week, contains items such as rice, pulses, oil, biscuits, matches and salt.

Click on an image below to open the photo gallery: 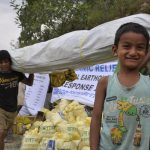 Our tents are suitable for a family of five 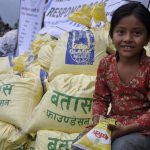 We also distributed food packs, including rice and oil and pulses 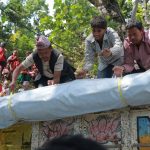 The tents are fire retardant, waterproof, and rotproof 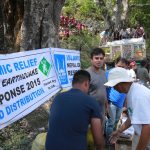 The community gathered as we arrived. 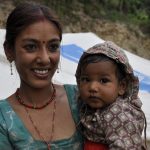 The tents are made from Poly-cotton, and have windows, inner partition, chimneys, ventilators and windows. 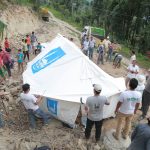 We demonstrated how to put up the tents.