East Africa: “We urgently need water and food or we will die”

HomeNewsFocus area (news)East Africa: “We urgently need water and food or we will die” 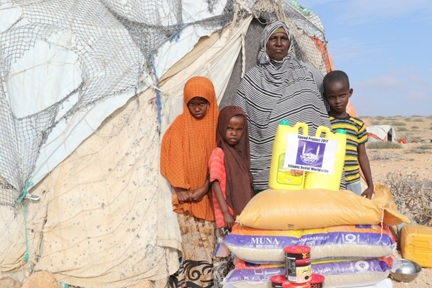 Mother-of-four says the drought in Somalia is the worst she has seen.

“We’ve had droughts here in the past but I don’t remember one as bad as this – and look at my age,” says 50-year-old widow Sareedo Barre Haji Muse.

“We lost our animals. Even our donkeys have died. This is the last one.”

In the Puntland state of Somalia, Sareedo used to own nearly 500 goats and sheep, living off the sale of their milk and meat.

“I have 60 goats left,” she says. “The rest have died. We have calculated that we have enough food for the next five days – that’s with one meal a day.”

With her four children, she left behind her home 75 miles (120km) away to go in search of water and support.

For the past three months they have been living alongside other families in a temporary camp in the small village of Baqbaq in the Dangoroyo district of Somalia’s Puntland state.

“We have no water left,” says Sareedo. “Until recently we were still able to walk for a couple hours with our donkeys to fetch water but now there is no water anywhere and we don’t even have donkeys to carry the water back. We are facing an emergency situation”.

Her children, she explains, are suffering from stomach cramps.

“We are lucky,” she sighs, “none have suffered complications yet, but we urgently need water and food or we will die.”

The United Nations has declared a famine in parts of South Sudan – the first to be announced anywhere in the world in six years – with concerns rising for millions more people across the Horn of Africa, including Ethiopia, Kenya and Somalia.

Islamic Relief has distributed food to 140 households in the camp where Sareedo and her children live.