Ending SGBV in humanitarian crises: An urgent call for humanity to act

When a humanitarian emergency occurs, be it a natural disaster or man-made conflict, people’s sense of safety and stability is often torn away. Add to that the horror and indignity of sexual and gender-based violence (SGBV), and they can be left emotionally broken.

On the International Day for the Elimination of Sexual Violence in Conflict, let us reaffirm our commitment to protecting those at risk by allowing them to speak on their own behalf, says Najah Almugahed, Gender Inclusion and Protection Advisor at Islamic Relief Worldwide.

Mariam* and her 14 year-old daughter were gang raped by soldiers during the conflict in Congo. The same soldiers killed Mariam’s husband and two younger sons, and then set her house on fire.

Tragically, Mariam and her daughter’s ordeal is not uncommon. It is estimated that during the height of the Congo conflict, between 1998 and 2003, a woman was raped every 48 seconds.

Among the millions affected, Mariam is one of the few women who had the courage to speak up about her experience of war.

On 19 June each year, the International Day for the Elimination of Sexual Violence in Conflict raises awareness of the need to put an end to conflict-related sexual violence.

It honours victims and survivors around the world and pays tribute to those who have courageously dedicated – or even lost – their lives to standing up for the eradication of these crimes.

This year’s theme, ‘The importance of a survivor-centred approach’, prioritises survivors’ needs, wishes and rights in the development and implementation of programmes.

Although committed to tailoring our programmes to the needs of those we help, international relief organisations tend to fall short in two ways: we make assumptions about people’s needs by comparing them to ours, and we neatly categorise groups of vulnerable people whilst ignoring their internal power and agency.

As a result, we design programmes with a one-size-fits-all approach, ignoring the differentiated needs of men, women, boys and girls of different ages and abilities, all experiencing a unique set of circumstances in their local context.

A survivor-centred approach on the other hand focuses on the needs of those we seek to help by explicitly asking them how we as humanitarian and development organisations can support them.

It actively involves survivors throughout the programme development process, asking them how we can prevent more cases of violence occurring and how can we respect their wishes in sharing or not sharing the information they give us.

This shift in approach can only occur when we realise and respect the power and agency of local voices, empower them to speak on their own behalf and appreciate our own limitations in a foreign setting where our role becomes merely one of active listener and facilitator.

This shift in programme design has been gradually adopted in Islamic Relief’s programmes, where we start with an ‘Analysis of needs’ prior to any intervention.

This is especially the case in SGBV response and prevention programmes, such as in Iraq where our centres provide a safe space and counselling for SGBV survivors and in Niger, where our financial support programme  helps SGBV survivors gain economic independence.

We also actively collaborate with local communities to hold awareness-raising sessions to prevent the occurrence of SGBV.

Importantly, Islamic Relief’s approach takes into account that SGBV is not limited to one gender.

In times of conflict men can be the silent victims of SGBV; like women, they too get sexually assaulted, raped and abused but in most cultural contexts there is too much stigma for them to feel able to speak out and seek help.

For example, studies reveal that Syrian men are just as likely to be victims of sexual violence as women,  whilst measuring their demoralised sense of self against social definitions of masculinity.

Another important consideration is that multiple and intersecting forms of discrimination increase the risk of being subjected to violence.

Women with disabilities for example, are three times more vulnerable to SGBV and women from ethnic/religious minorities are at even greater risk.

At Islamic Relief, we strongly advocate for the use of age, gender and diversity analysis tools to capture those with differentiated needs. We are currently piloting analysis tools in Pakistan, Afghanistan, the Occupied Palestinian Territories (Gaza), Syria, Ethiopia, Sudan, Kenya and Niger as we are learning from own approaches to programme implementation.

Islamic Relief also works closely with faith and community leaders to create champions for SGBV prevention and response. Working with local people to build on the existing community-based protection systems has always been the most sustainable prevention scheme used in the aid sector.

In times of conflict and disaster, we know that faith can be a powerful force in bringing people together and a constructive tool in protection schemes that support our efforts to end SGBV.

The global commitment to ending SGBV

Donors and international organisations committed to tackling SGBV need to pave the way with both moral and financial commitments.

Currently, less than 4% of humanitarian funds are used for protection and only 1% is allocated for SGBV programming. Without sustainable funding most of those programmes run on an ad hoc basis, with single-year programming that does not have a sustainable impact.

Fortunately, the international community is realising the importance of coordinating efforts and advocating for the need to invest more resources into ending sexual and gender-based violence in conflict and humanitarian settings.

On 23-24 May 2019, the Norwegian government hosted the first pledging conference in which 21 donors announced a total of $363 million towards ending SGBV in humanitarian crises. 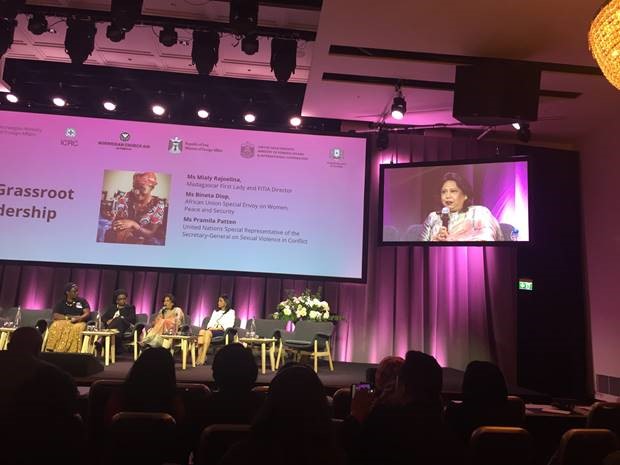 On stage at the pledging conference in Oslo: the First Lady of Madagascar and FITIA Director Mialy Rajoelina, the African Union Special Envoy on Women, Peace and Security Bineta Diop, and Pramila Patten, the United Nations Representative of the Security-General on Sexual Violence in Conflict.

In November 2019, the Foreign and Commonwealth Office in the UK will hold a conference to build on the Protection from Sexual Violence Initiative (PSVI) summit of 2014, in an effort to rally efforts and re-pledge commitments globally.

We are all accountable

Working in the most challenging settings, with internally displaced people, refugees and migrants in humanitarian crises and conflict settings requires a high level of understanding and sensitivity towards SGBV.

The GBV guidelines of the International Agency Standard Committee (IASC) state that humanitarian practitioners must assume that GBV is occurring in any humanitarian crisis and must act to address it regardless of the presence of data.

There is growing evidence that sexual violence is used as a weapon of war, aimed at destabilising and demoralising communities. This means we all have a responsibility to respond.

As a minimum we should be able to build concrete referral pathways for survivors to receive essential medical and psychosocial support, and this means effective coordination between all stakeholders if we are to change the way we respond to SGBV.

Later this year, Islamic Relief is launching an Islamic Declaration on Gender Justice, urging the international community to do more to end SGBV.

We ask others to join us in placing survivors at the centre of our programmes by empowering local communities to take ownership of developing more cohesive and sustainable programmes.

The International Day for the Elimination of Sexual Violence is a chance to reaffirm our commitment to acting responsibly as we work to end sexual and gender based violence around the world.

Even if it is a long journey to see a complete end to SGBV, we as humanitarian workers are accountable for taking the first steps.

*Name changed to protect her identity