This International Day for the Elimination of Sexual Violence in Conflict, Islamic Relief CEO Naser Haghamed calls for the international community to do more.

Today, 19 June, is the International Day for the Elimination of Sexual Violence in Conflict, which raises awareness of the need to put an end to conflict-related violence.

Tragically, one in three women is likely to face sexual or physical violence throughout her life –with a higher likelihood if she is trapped in a conflict zone or in a humanitarian emergency.

Today, the fourth year of the International Day, should be a wake-up call for the international development community to do more.

Tackling the root causes of sexual and gender-based violence

I am proud to say that at Islamic Relief, not only do we provide emergency disaster relief in conflict zones, but we also work to improve the lives of affected communities.

Guided by the concept of social justice (‘adl), we have been working towards addressing the root cause of sexual and gender-based violence (SGBV); inequality between women and men.

Unfortunately, no matter where you look, there is no place where total gender equality has been achieved. Almost 40%, or 1.4 billion, of the world’s girls and women today live without the same rights as men.

I believe that a more equal world is attainable and as the world’s largest independent Muslim humanitarian charity, Islamic Relief has a unique role to play. With a presence in over 40 countries, we are able to reach some of the most challenging parts of the world to promote gender equality.

Faith is critical to ending SGBV

In these places, faith is often what people cling to when life gets tough and I believe that faith is an important part of the solution to addressing SGBV.

I spoke about Islamic Relief’s work in this area at the first ever international conference to end sexual and gender-based violence held in Oslo last month, Ending Sexual and Gender-Based Violence in Humanitarian Crises. 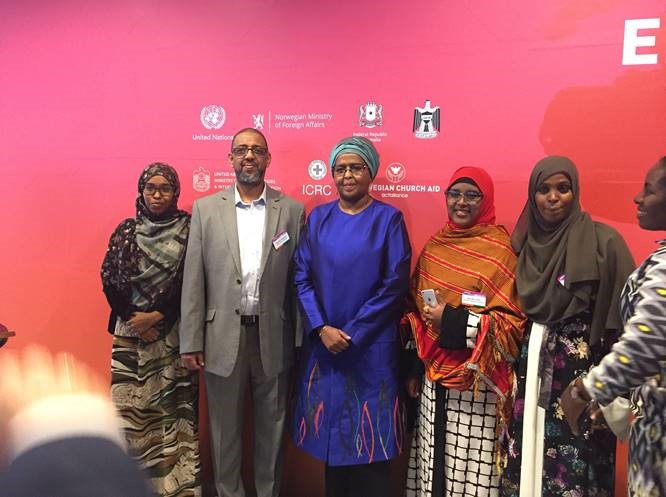 Islamic Relief CEO Naser Haghamed at the Oslo conference with the Minister of Women and Human Rights Development of the Federal Government of Somalia, Deqa Yasin Hagi Yusuf and representatives of the Somali charity sector.

We have seen that faith leaders can be agents for creating social change, and mobilising them can be effective in reducing gender-based violence and helping survivors heal.

Since 2016 we have been training and educating imams in places like Mali and Lebanon on preventing all forms of gender discrimination and violence.

Our work recognises the importance of a survivor-centered approach, which also happens to be the focus of this year’s International Day. In Iraq for example, we work with women to provide psychosocial support, and safe housing/safe spaces to survivors.

Our programmes also empower women to take charge of all aspects of their lives, for example in the areas of education and financial inclusion.

Similar projects in Bangladesh have resulted in participating families now earning almost four times what they used to.

Regardless of war or peace, Islamic Relief never stops its work to end SGBV.

Closer to our global base in the United Kingdom, we work with the charity ADVANCE to place Independent Domestic Violence Advisors (IDVA) in maternity, A&E and sexual health departments in hospitals across West London. This allows us to reach more survivors early on to offer specialist support.

SGBV has no place in Islam

In ending SGBV, we recognise the need to push key faith principles to challenge and stop harmful cultural practices and social conditions.

Later this year, I will be launching Islamic Relief’s innovative Islamic Declaration on Gender Justice, which is the first Islamic call to action securing pledges from dozens of organisations on addressing discrimination and violence against women and girls, including during humanitarian crises.

The Declaration sends a strong message that SGBV has no place in Islam, and I am very pleased with the support received for it so far from both faith and non-faith-based organisations.

We hope the Declaration will move us closer towards eliminating SGBV not just in conflict, but in everyday life.

Through the Declaration and our vital emergency relief and sustainable development programmes, Islamic Relief will ensure that religion is no longer used as a cover for SGBV but becomes a powerful tool to help combat it.

Islamic Relief is pushing for an end to all forms of gender-based violence. Discover more about how we’re making a difference through our ‘survivor centred’ approach to humanitarian and development programming.