Fear grows with the spread of cholera in Yemen

As concern grows about a surge in the number of suspected cholera cases in Yemen, Islamic Relief is supporting a healthcare system on the brink of collapse.

Since the start of the year, over 120,000 suspected cases of the deadly disease have been reported in all but one of the country’s governorates. Of these, more than 1,640 have been confirmed as cases of cholera, and over 100 people are thought to have died from the disease. Many cases are children under the age of five, with malnourished children particularly susceptible and least able to fight off the disease.

The outbreak comes at a time when Yemen’s healthcare system is close to collapse after four years of war and blockade. Health services are limited and there is a severe shortage of medication – even the tests needed to diagnose cholera are in short supply.

Most vulnerable are communities in the frontline of the fighting or in remote rural areas, where hunger is prevalent and there are no sources of clean water.

In 2017, Yemen experienced the worst cholera outbreak in history and the ensuing outbreak that lasted well into 2018 is thought to have infected over one million people.

While the situation improved, the new spike in cases is extremely worrying and our teams fear that conditions are ripe for another outbreak.

“The conditions here are so poor that there was no isolation centre to treat cholera cases and sometimes more than five people were sharing two beds,” said Islamic Relief aid worker Najat Elhamri during a visit to Yemen in 2018.

“Those with infectious diseases such as cholera were not being properly isolated, and conditions were almost begging the germs to jump from body to body, ravaging those already frail from malnutrition and other diseases that are not being properly treated due to a chronic lack of medicine and medical supplies.

“Premature babies were particularly at risk, in incubators with no ventilation and no adequate medical care.” 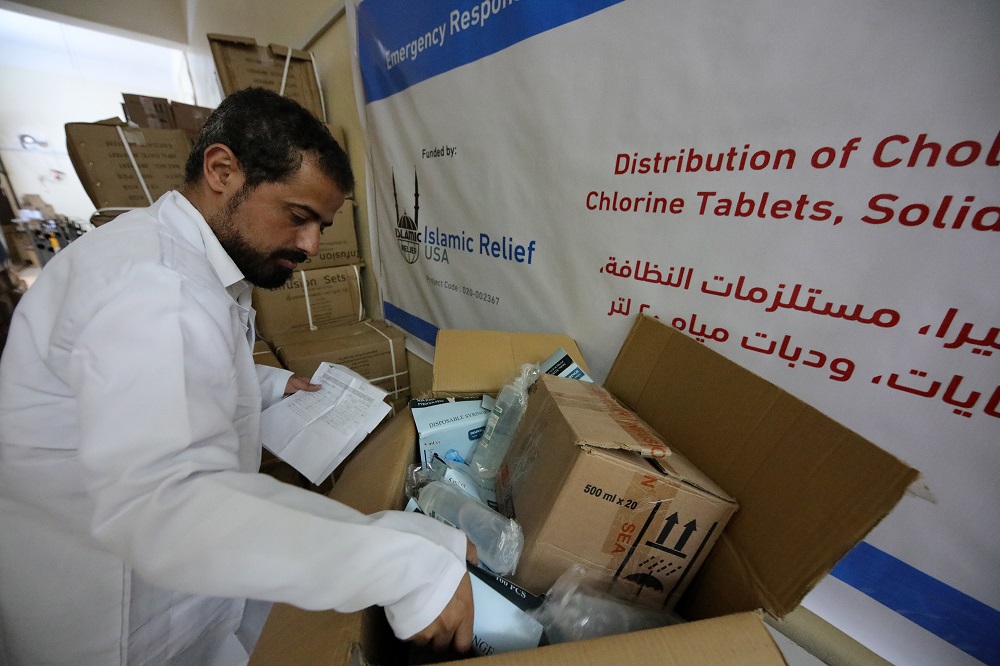 An Islamic Relief distribution of cholera medicines and other vital items in Hodeida in 2018.

Islamic Relief is currently supporting eight Diarrheal Treatment Centres in Sana’a and Taiz with medications to manage acute watery diarrhoea – particularly that caused by cholera. In 67 health facilities, we are also providing medicine and laboratory supplies as well as financial support to enable health workers to keep working.

In addition, we are in the process of shipping in more desperately needed cholera medication, which will supply 57 targeted diarrhoeal treatment centres in Al Hudaydah, Dhamar, Amanat Al Asimah, Sana’a and Amran.

Now in its fifth year of war, Yemen is in the grip of the world’s worst humanitarian crisis. An estimated 80% of the population – 24 million people – require some form of humanitarian or protection assistance, including 14.3 million who are in acute need.

Islamic Relief has been working in Yemen for over 20 years, and has continued providing lifesaving interventions on the ground throughout the catastrophic conflict. Other health projects include supporting physiotherapy and prosthetic centres as well as a renal dialysis centre and two rural hospitals.

With your support, Islamic Relief can continue vital work to ease the suffering in Yemen. Please donate to our Yemen Crisis appeal today.