Food is reaching families who have been cut off from the rest of their country by conflict.

The population of Aden, in south Yemen, is completely isolated; bordered by the Gulf of Aden in the south and intense conflict in the north, its 800,000 residents have little option but to stay in their homes and hope for peace.

Islamic Relief has been able to meet some of their immediate needs.

Haney Masood, from Islamic Relief’s headquarters in the UK, said: “We have been able to reach Aden, on the south coast, which is very badly affected. Aden is cut off from the rest of the country by conflict, so people in the city are completely isolated. Currently, nothing can get in or out of the city. We’ve been able to work with local suppliers to make sure we can get food to those who need it most.”

Islamic Relief is also supplying trauma kits to Friendship Hospital, 22 May Hospital and Aden Medical Complex, all in Aden, which are being inundated with people injured by the conflict.

We launched our Yemen crisis appeal nearly two weeks ago, and within three days were able to start distributing aid on the ground in addition to our ongoing work. Now, as the situation in Yemen continues to deteriorate, we have provided food assistance to 48,615 displaced and conflict-affected people.

People are fleeing the country

In some of the calmer moments, Islamic Relief staff have been able to visit communities, identifying families in need of help and giving them a food voucher to exchange for food at a certain time and place. In Aden and the capital city Sana’a, however, Islamic Relief has taken to delivering food door-to-door in order to reduce danger to families who would otherwise have to travel to collect the food they badly need. In many cities, Islamic Relief is using food previously stockpiled. As time passes, however, we will need to find ways to get food into the country.

The number of people displaced by the intensification of conflict in Yemen is estimated at between 120,000 and 150,000 people. Many people have moved to rural areas in the hope they will be safer.

Before the conflict deepened four weeks ago, the country hosted around 245,000 refugees, and some of these are now fleeing by boat. Around 2,000 people have already arrived in Djibouti and Somalia, according to the latest UN figures.

Our work in Yemen continues despite fuel shortages and intermittent power. Islamic Relief has 15 staff members in Sana’a and more than 100 staff in different field sub offices in six governorates, many of whom are coming in for part of the day then returning home when it is quieter, before working from home into the evening.

Haney Masood added: “We have limited staff in the main office, which is in Sana’a, because people are unable to travel from their homes. It is a very tense environment. Everybody is wary.

“We are finding ways to reach people who need help. Before the conflict we were regularly supporting around one million people across Yemen in ten governorates. If they were in need before, they are even more in need now.”

Stand beside those in need in Yemen. Support our crisis appeal. 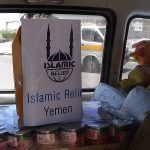 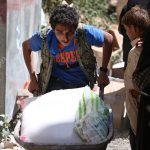 One beneficiary comes to pick up food for a month on behalf of his family. 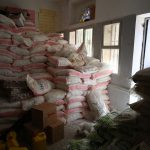 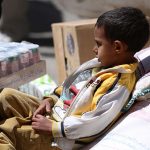 One youngster waits while food is collected for him and his family. 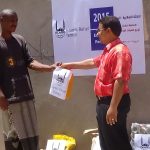 Islamic Relief assesses needs then gives beneficiaries a food voucher that can be redeemed for food at a distribution point. 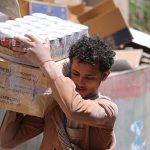 Carrying goods that will help ease the suffering of those caught up in the conflict.