Flash flooding has crippled families in Yemen this Ramadan

HomeAppealsFlash flooding has crippled families in Yemen this Ramadan

Thirteen governorates have been affected with Sana’a city, Sana’a, Marib, Aden, and Lahj having seen the most signiﬁcant impact.

Displaced families living in camps have been hit the hardest as tents were torn down and possessions destroyed. These families now have very little protection in the face of these harsh elements. “Most are now without shelter; they’re cold and hungry,” according to camp management staff in Aden.

The flooding has raised significant health concerns as water and sanitation infrastructure has been damaged. There are now fears of water contamination which will exacerbate the spread of dangerous diseases such as cholera, malaria and dengue fever. 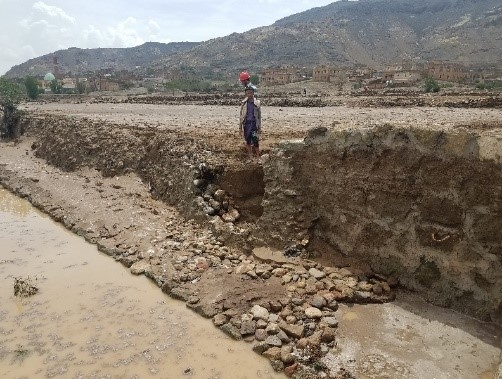 The floods have caused widespread ruin and destruction

Yemenis have already experienced five years of turmoil. Twenty million people in Yemen are food insecure, over 3 million have been displaced and around 20 million are in urgent need of healthcare. Therefore, the impact these floods will have on the economy in terms of loss of livestock and crop damage could have devastating effects on a population already on the edge of survival.
On top of that, the majority of the population will be observing Ramadan, fasting from dawn until dusk. This should be a time for them to pray and connect with God, but sadly many families will be overcome with anxiety and hunger, struggling to find food to open their fasts.

Islamic Relief Yemen were able to respond immediately to the disaster, providing canned food and food baskets to more than 250 families in the Sanaa governate. We’re continuing to monitor the situation and we’re in communication with other organisations such as the UN in order to coordinate our response.

With your support, we can continue to provide this vital assistance to those suffering in Yemen. Please donate to our Yemen Appeal.