Islamic Relief has officially handed-over a national eye-hospital and a teachers training centre in Mogadishu, Somalia. The multi-million dollar facilities are designed to improve essential services which were devastated during longstanding conflict in the country.

The Minister of Education hands an appreciation certificate to Dr. Mustafa of RCO Bahrain, who stands with Islamic Relief’s vice chair of the board of trustees.

The modern, fit-for-purpose buildings were constructed in Somalia’s capital city through an ambitious project – launched in 2012 with funding from RCO Bahrain – and given over to the government earlier this month. The original buildings were destroyed during years of civil war in the east African country.

The National Eye Hospital will provide poor people with life-changing eyecare services and the Somalia Teachers Training centre is set to help improve educational standards across the country.

The handover ceremonies for the buildings – which were built by Islamic Relief – took place on 6 November, in Mogadishu. Islamic Relief’s Dr Mohammed El-Alfy, vice chair of the board of trustees and regional director Yusuf Ahmed joined Dr Mustapha, CEO of RCO Bahrain and Aslam Mohammed, country director.

The Somali Minister of Health presided over the handover ceremony for the eye hospital, which is now known as the Kingdom of Bahrain National Specialist Hospital. The hospital is equipped to accommodate up to 260 in patients, with facilities for 60 children.

The Minister of Higher Education presided over the handover for the training centre, which is now known as Kingdom of Bahrain Education Complex. It offers space to 700 students, and accommodation for up to 160 people in its boarding facilities. Already, almost 400 people – of which around 30 per cent are female – have registered for courses, and it is hoped that links will be developed with the innovative Islamic Relief Academy in Birmingham, UK.

Click on the images below to view the before and after photos: 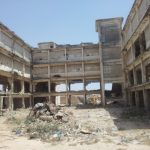 The Mogadishu hospital, before construction began. 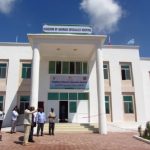 The newly-built eyecare hospital has beds for 260 patients. 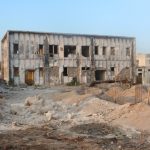 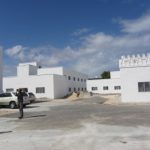 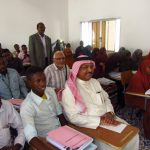 Islamic Relief and RCO Bahrain representatives visit students in one of the classrooms at the new teachers training centre.

Islamic Relief has provided much-needed aid to vulnerable families in Somalia since the 90s, and delivers emergency relief and development programmes focused on long-term solutions to hunger and poverty.