HomeWhere We WorkKenyaHelping to keep communities afloat after devastating flooding in Garissa, Kenya

Islamic Relief have been providing vital support after severe flooding struck Garissa, Kenya. The flooding, which struck the region in April 2020, completely submerged homes and left many living in temporary shelter. It also caused destruction to farms which are critical to livelihoods in the region, and left almost 7, 000 people in need of urgent humanitarian assistance.

Part of Islamic Relief’s response included distributing essential aid to 400 households which contain a hygiene kit and other useful items.

Among the beneficiaries at our distribution site is 43-year-old Fatuma Salat Gurey, who is a mother of eight.

Inside the box she has received are two cooking pots, plates, mugs and spoons. There are also tea strainers, jugs and serving spoons, as well as washing basins, bars of soap and a dignity kit. 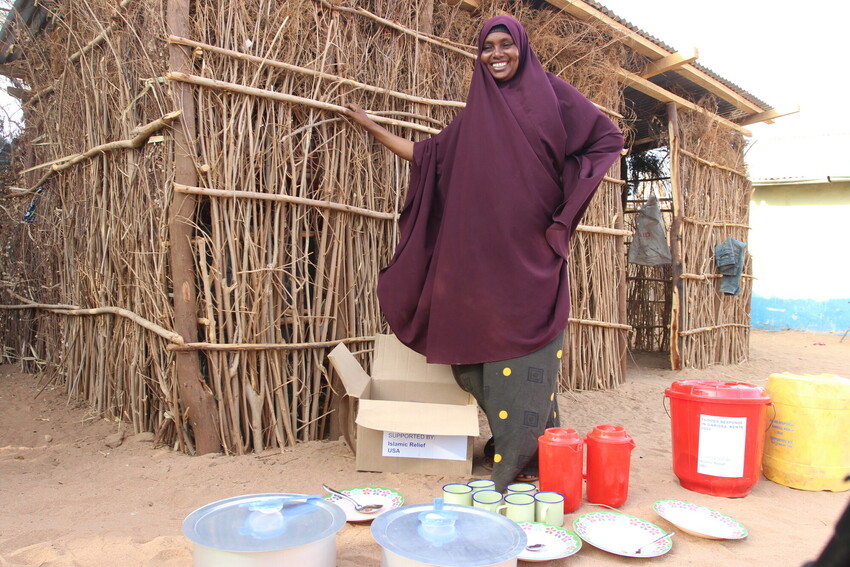 Before the floods which devastated Garissa, Fatuma was a farmer and owned a large farm near the Tana River and grew vegetables and fruits. However, she now sells vegetables at a shop located in her home compound.

“I suffered a very big loss because there were some crops (vegetables) that were ready for harvesting but they were destroyed by the floods.

“I had 150 ripe mango trees that were ready for harvest and all were destroyed by the floods except three that remained.

“All the land that we used to farm during the floods was submerged by floods and sunk into the river”, explains Fatuma.

Before the floods struck, Fatuma was self-sufficient and was able to comfortably cater for her large family.

“Before I was very stable and did not need assistance from anyone as I was earning around (Kshs.)100,000 ($1,000) after harvesting (my crops) after three months,” she explains.

The floods have also affected her ability to educate her children. After schools in Kenya were closed in March 2020 following the Covid-19 pandemic, Fatuma could not afford to hire teachers to provide tuition to her children.

“The farm also used to provide school fees for my children but now I am struggling to pay school fees. That was a big loss for our family,” says Fatuma.

Coping with the disaster

A short distance away in the sub-district of Atheyley lives Abdullahi Abdi Farah, another beneficiary of our emergency response project in Garissa. Father-of-ten Abdullahi has worked as a farmer in Atheyley for more than 30 years.

However, his farm was destroyed during the devastating floods.

In order to survive and cater for his family, Abdullahi has now turned to charcoal burning.

“My daily income has reduced because I do not get anything from the farm. There were farm products that were destroyed by the floods such as mangoes, paw paws, onions, tomatoes, bananas and Sukuma wiki. But now I have turned to become a charcoal burner to earn my income.

“Even right now we do not have any intention of planting near the river. We cannot get school fees or medication for the children”, says Adbullahi.

“The items we received from Islamic Relief are ones we normally buy from the market… since we have received them, we will save that money and use it for school fees for my children”, says Abdullahi. 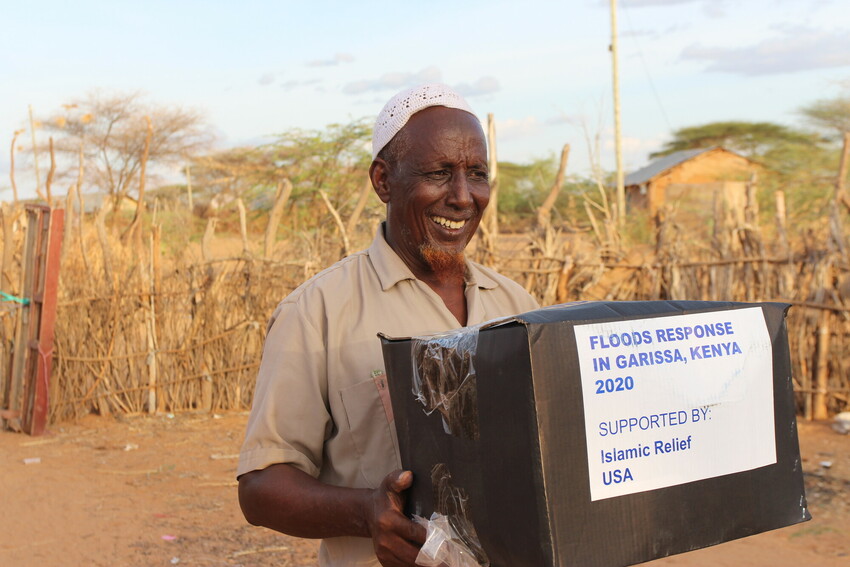 The support Fatima received has also proved to be very helpful.

“The items which I normally struggle to buy from the market have been given for free”, she says.

Abdullahi, who is also the Chairperson of the village, says that more assistance is still needed.

“We still need more help because many people are living in poverty without a daily income as they were affected by the floods.”

“Because our farms were swept away by the floods, we are requesting Islamic Relief to bring us farm inputs as well beddings and mattresses”, says Fatuma.

Islamic Relief is implementing a recovery response project which is targeting 400 families in order to help those affected by the flooding to get back on their feet.

Please donate now in order to help us continue helping the world’s most vulnerable members.