“I worked 20 hours a day and was beaten for falling asleep”: a former child worker speaks out

HomeWhere We WorkNepal“I worked 20 hours a day and was beaten for falling asleep”: a former child worker speaks out

Human trafficking and child labour are the world’s fastest growing global crimes. A complex, cross-cutting global business, it sees 40 million people trafficked every year. Some 71% are women and girls – most of whom will end up being sexually exploited.

Across the world 152 million children are trapped in child labour – 73 million facing the worst forms including child slavery. Child labour steals childhoods. People’s hopes of escaping poverty and building a better life for their families are exploited. They often fall deeper into poverty.

It’s a trap that former child worker Nasruddin, now 37-years old, knows all too well. Aged just 10, he was forced to drop out of school in Nepal and trafficked to neighbouring India.

“My father knew a few people in India, which is why I was sent to work in a textile factory,” he says. “It was a scary time for me, especially being away from my family, in a foreign country at such a young age.”

During his time at the factory, he often experienced severe physical, psychological, financial and emotional abuse.

“I worked from 6am to 2am every day without a break, and I was given 2 rotis (flatbreads) with a red or green chili a day. There were times where I was so tired that I fell asleep whilst sewing hundreds of garments and would be beaten by the men for falling asleep. My job was to sew the smaller items on garments like wedding dresses, because they said little children’s hands were smaller and were able to do the embroidery details better.”

Nasruddin was never given his full salary or wage for any of his hard work. “I used to dream of escaping, but where could I go with the 5 rupees I had in my pocket?”

After a dispute with traffickers, Nasruddin’s father went to pick him up from the textile factory. “They let me go, but I didn’t receive any salary for the five years I worked there. I was only given new clothes for the journey.”

Like many child labour victims with no formal education or skill based trainings, Nasruddin soon returned back to India to find work. “When I was 15 I returned to Bangalore with a few friends to work in a brick factory.”

This time with he had the added cultural pressure to meet dowry demands which were common in his community, and continue to still provide for his family.

Nasruddin is from Rauthat, one of the poorest districts in Nepal and home to some of the most underprivileged and marginalised castes in the country. The pressure to meet dowry demands is a key factor driving the debt bondage industry, where struggling families take high interest loans due to social pressure to meet dowry demands. They’re subsequently trapped in debt bondage, unable to pay back the loans. 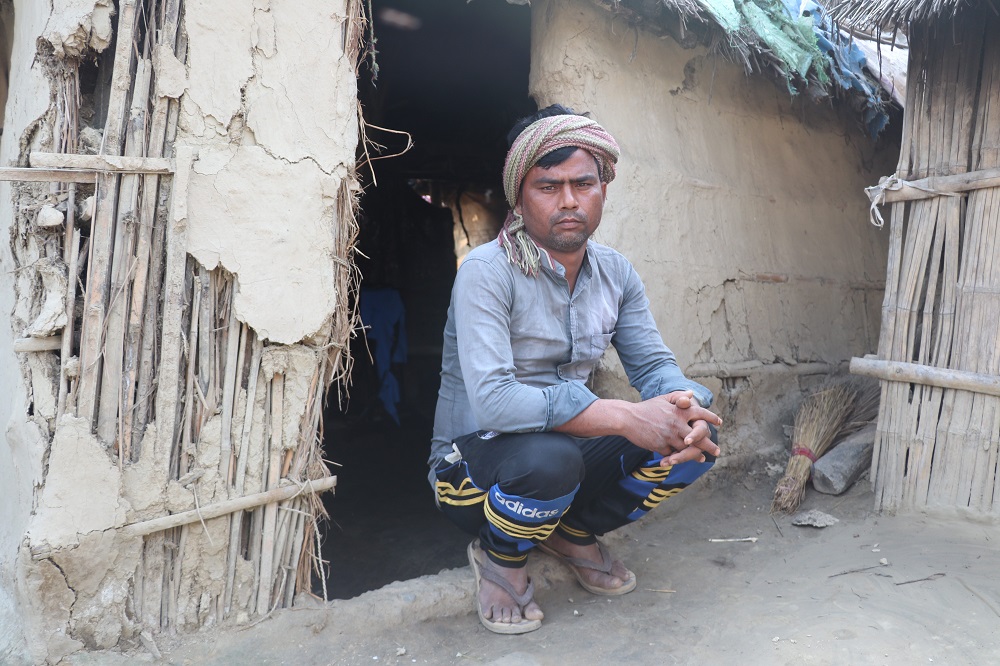 Nasruddin, 37, now works in a brick factory in Rauthat, Nepal.

And abject poverty drives global child labour slavery and human trafficking practices; disrupting millions of children’s education, development and life chances as they struggle to find employment that allows them to escape the cycle of poverty. As such, there is a continuation of a generational survival state where survivors and their families are re-victimised.

Nasruddin’s 14-year old daughter, Najmun, was working with him in a brick factory in Rautahat. But then, as a child thought highly vulnerable to child sex trafficking, she received support from Islamic Relief and our local partner the Rural Development Centre.

Our project in Rautahat, which is tackling child labour and trafficking, has helped her father learn to recognise the importance of girls’ education. Through family sessions focused on solutions to increase parents’ involvement in their children’s learning, parents were encouraged to attend teacher learning circle meetings to understand teachers’ concerns. Regular conversations with parents and the community about their role in supporting children’s education helped raise awareness.

Nasruddin wants a better future for his children, so plans to send his daughter to school. Najmun is receiving tailoring training through the project, which offers educational support to help children develop vital knowledge and skills for life and work. She regularly attends the child protection centre.