The Chair of Islamic Relief Worldwide has paid warm tribute to Chief Executive Officer, Naser Haghamed, who steps down from his position on January 31 for health reasons after 27 years of distinguished service.

“When Naser joined us in 1994 our organisation was only ten years old,” says Dr Ihab Saad. “The contribution he has made to our development since then in various roles is profound and immeasurable. In nearly five years as CEO he has been a revelation and an inspiration, leading from the front in expanding our impact, our income and our influence.

“Naser will be a hard act to follow, and I wish him all the very best for whatever the future holds. He has expressed the hope of continuing to support the cause in some capacity in the future, and if that hope materialises we will be delighted to welcome him back with open arms.”

It was in October that Naser Haghamed, CEO of Islamic Relief Worldwide since 2016, announced his intention to step down from the role for health reasons. He leaves the organisation with huge expressions of gratitude from staff and trustees alike for his hard work, dedication and passion to help those suffering across the world.

Naser rose through a variety of roles before being appointed as CEO. He has worked tirelessly to ensure that Islamic Relief’s support reaches those most in need. Under his exemplary leadership, the charity has continued to grow, and we are proud to have touched the lives of over 120 million people since we were founded in 1984.

Naser Haghamed, 54, was born in Eritrea but was forced to leave his homeland as a refugee before he could complete his schooling – an experience that shaped his life and later fuelled his passion to serve the world’s poor and marginalised through Islamic Relief.

In his final interview for the website as CEO, Naser reflects on the huge challenges of the job and speaks poignantly of his visit to Niger in West Africa that moved him to tears: “ It’s one of the poorest countries in the world, but you don’t realise what that means until you see it yourself. I visited an area about an hour and a half from the capital…we’ve helped it grow into vast green land and had huge long-term sustainable impact. I met the local community and saw their joy”.

“It is with great sadness that poor health has led me to leave Islamic Relief this week, bringing to an end almost 30 years of service,” says Naser. “I am honoured to have been part of Islamic Relief’s journey as we have expanded and deepened our impact in supporting the world’s most vulnerable people.

“I wish to thank colleagues past and present and our thousands of volunteers who have worked so hard to make sure Islamic Relief is there as a lifeline for people in crisis, and an agent for positive change in the world. Their dedication has been more evident than ever during the coronavirus pandemic. As the world slowed down and many organisations were forced to scale back, Islamic Relief strained every sinew to step forward.

“My wish is for Islamic Relief to go from strength to strength, making an even greater contribution to the fight against poverty and suffering. Although I will no longer be working with the organisation, Islamic Relief will remain in my heart, and I will continue to support it and its great efforts in every way that I can”. 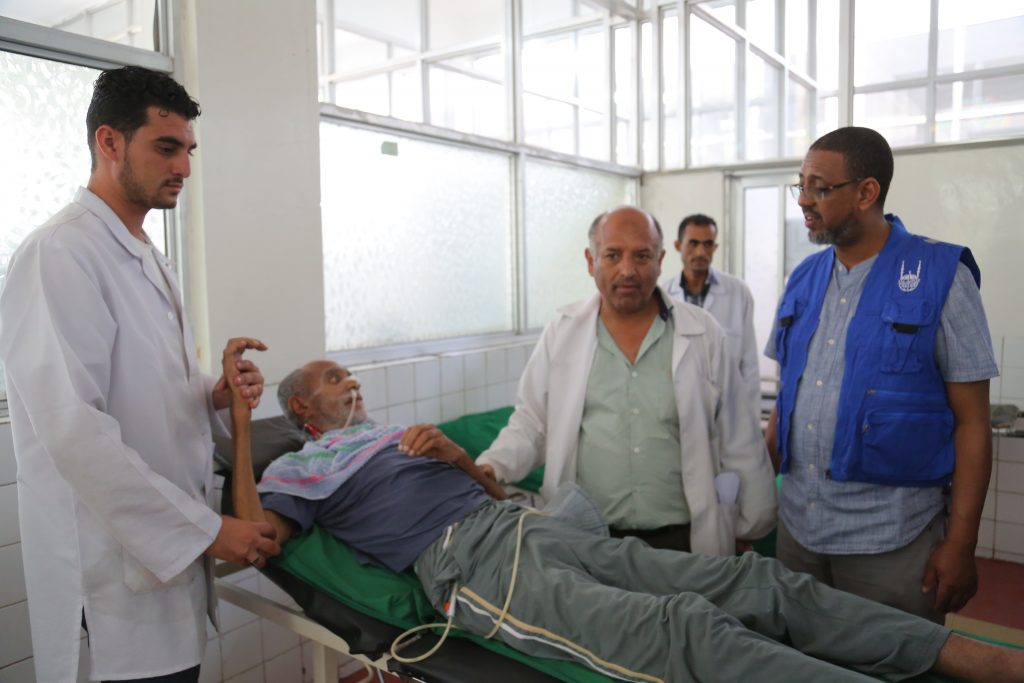 Naser visiting patients in hospital during a visit to Yemen in 2019.

And so what vision does Naser have for Islamic Relief’s future? “We can get even faster in our response to emergencies, especially in the first few days and weeks when people are most in need of shelter, food and water. We also want to make our programmes more sustainable so that fewer people need ongoing support and the environment is better protected. I also hope we continue to promote localisation, which is one of the most important humanitarian agendas of the last few years, and empower more national and local agencies and civil society organisations”.

Recruitment of Naser’s successor is underway. We are looking forward to the new CEO building on what has been achieved during Naser’s tenure in what will be a new chapter of Islamic Relief’s story.

We wish Naser a speedy recovery, and hope that he will be able to re-join the Islamic Relief family in some capacity once his health improves.

Jazakallah khair, Naser. May Allah bless you for your immense efforts.