No place to call home: Climate change is costing indigenous communities their homes and livelihoods

Climate change is altering migration patterns throughout the world, but it is the poorest and most vulnerable people that are bearing the brunt. In Pakistan, extreme temperatures, consistent floods, droughts and coastal erosion are some of the factors causing many to swap their homes and livelihoods for a chance to survive.

This is one of the findings from Islamic Relief’s research report into climate-induced migration across Balochistan, Sindh and Khyber Pakhtunkhwa.

Poor and marginalised indigenous communities with strong cultural connections to the land are being forced to make difficult trade-offs between maintaining their cultural identity within their native land– or leaving their land behind forever.

Facing failed crops due to land degradation and drought, and water scarcity as a result of extreme temperatures, many feel their only choice is to move away.

Shah now lives in Quetta, Pakistan, after leaving his home.

Forced to flee in Quetta

Shah, 21, and his family were forced to migrate from Killi Hayatabad to Union Council Panjpai, Quetta, 2 km away. They left their native land with heavy hearts and little hope of returning.

“My circumstances forced me, my family, and most people in my community to leave our own homes and agricultural lands, which lay barren as we had no water for everyday use for our families and livestock,” says Shah.

“We walked for about 45 minutes to reach our destination. I have always been a farmer and I earned 20,000PKR per month from my fields. After migrating I still farm but to match my previous income and to fulfil my family’s daily needs I sometimes have to work as a labourer too.”

The Islamic Relief research examined climate-induced migration patterns in Balochistan, Sindh and Khyber Pakhtunkhwa. It revealed that most climate migrants in those areas migrate within the same province.

According to findings, the key factors leading to displacement and migration in Balochistan were droughts, floods and extreme temperatures.

Dr Hafiz Mumtaz from Gomal University says that extreme climatic events including flash floods are becoming more common and have a devastating impact on vulnerable communities.

“On one side, the flash floods directly washed away houses on the riverbanks and on the other side it increased the underground water level, starting the water-logging phenomenon,” he says.

Water-logged areas aren’t suitable for agriculture, posing a devastating blow as most of the communities in the area are highly dependent on agriculture for livelihoods. Nomadic and other poor people living along riverbanks have been forced to migrate to other areas.

In Sindh province, increased flooding and cyclones are driving many people in coastal communities to migrate temporarily to cities like Karachi Hyderabad and Thatta.

Sindh received historic level of rain during August and September 2020, when Pakistan was devastated by heavy monsoon rains and urban flooding. Countrywide, 409 people died and 402 were injured. Approximately 305,150 homes were partially or fully damaged. 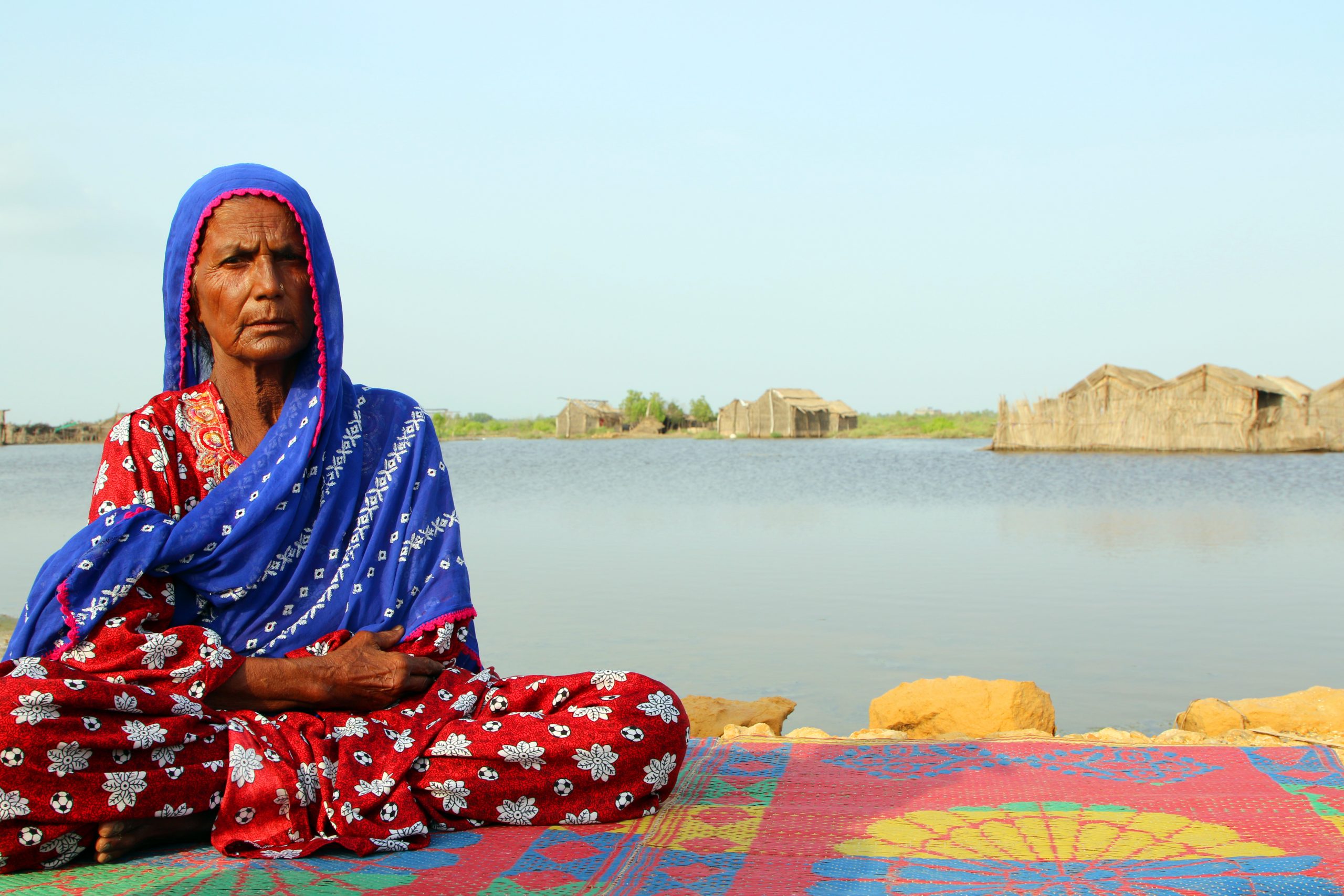 Fatima* sitting near her flooded village in Thatta.

Fatima is one of many individuals impacted by the flooding in Sindh when her village was severely flooded.

“There are about 950 people in this village, which has 115 homes. It rained for about a week, wreaking havoc in our village. We lost our homes, we lost our livestock. Because of the flood half of the people have moved to a safe location but the other half are still here,” says Fatima.

Islamic Relief is delivering a number of initiatives across Pakistan to reduce the damage caused by disasters such as flooding, and to empower communities to better protect themselves. These include building community resilience in Khyber Pakhtoonkhw; and mobilising rapid emergency response teams to provide assistance such as cash grants to vulnerable families affected by flooding in Sindh. 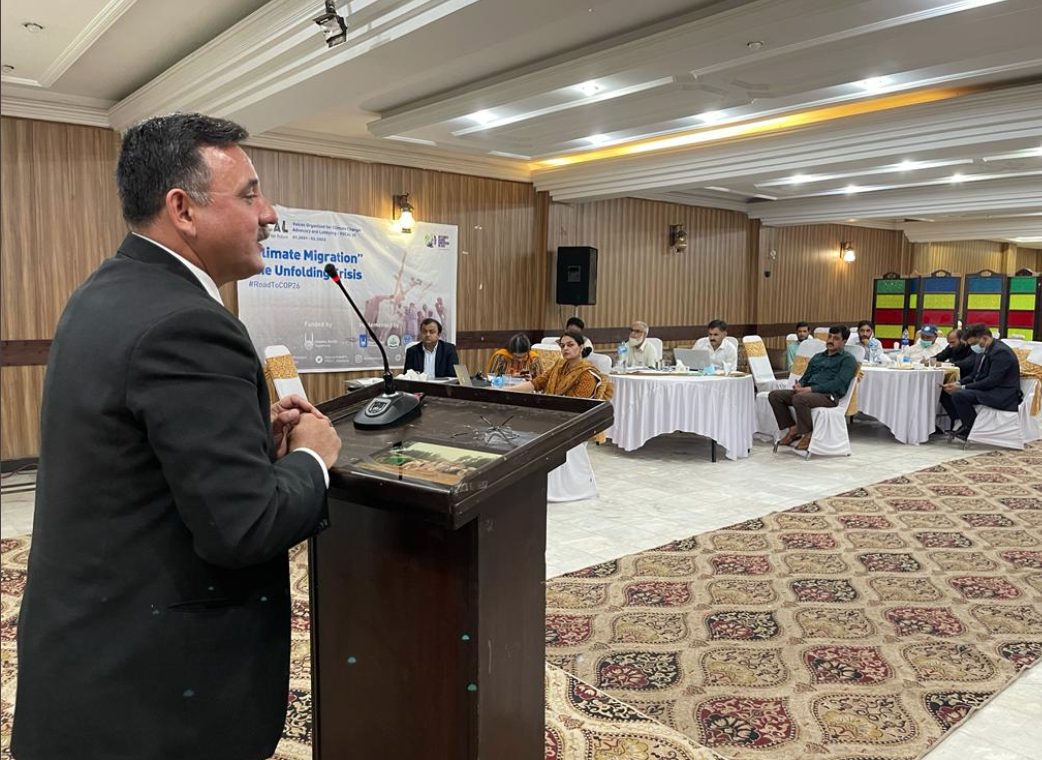 Islamic Relief is committed to bringing the voices and experiences of vulnerable communities to local, national and global platforms for dialogue. Islamic Relief Pakistan has hosted a series of 5 Road to COP26 events across 5 provinces. The events aimed to share research insights and fostering partnerships and policy dialogue around climate induced migration in Pakistan.

We will also be bringing the voices of local communities to COP26 conference in Glasgow, to ensure that the experiences of these communities are integrated into all discussions and commitments at the pivotal climate summit.

Poor and vulnerable communities carry the overwhelming burden of the climate crisis even whilst being the least responsible for the global emissions. They have lost their homes, their livelihoods and their cultural connection to their native land due to forced migration and displacement as a result of climate change. It’s time we listened to their experiences and put their voices at the centre of the climate action commitments.