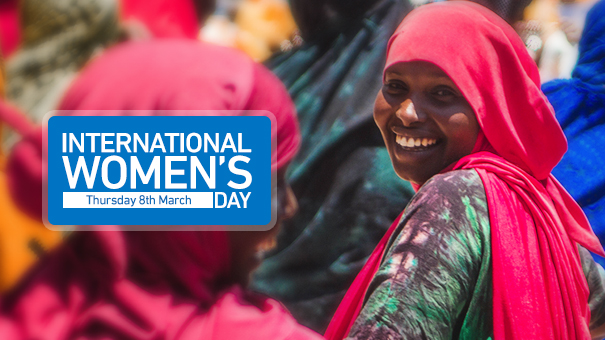 We live in a world where poverty and gender inequality go hand in hand.

Across the developing world, women and girls have fewer opportunities in life, limiting their potential as individuals and holding back the development of their societies.

In light of International Women’s Day, we are sharing some the stories of some inspirational women who have overcome some immense difficulties and hurdles in their lives.

Hala got married in 2014. She was engaged for 11 months at the age of 20 and the camera was her permanent companion. It recorded all the gorgeous, crazy, and beautiful moments she went through.

Every picture she took pinned her happiness to that time and memory. She connected all good times to that date. Her marriage represented a new beginning, a new life, and a new journey. That marraige day is supposed to refelct a series of beautiful moments and memories, but that was not the case with Hala when we asked her about her marriage.

Her husband, Khaled, worked as a press photographer. He died while he was holding his camera and documenting the Israeli war on Gaza. The same camera that recorded the birth of their love also recorded Khaled’s death. This traumatic event had an immense impact on her, she says:

“On that day all my happiness, dreams and hopes crashed in a single moment. The death of my beloved husband shocked me. We were just married, we had plans, and started to establish a family. I was unable to bear the pain, my life turned colourless, and all things seemed bleak.”

Hala’s family and friends persuaded her to finish her studies at university and not long after she gave birth to her daughter, Tolin. Tolin’s birth provided her with a new surge of energy, inspiration and motivation. “Losing a husband and being a widow was no longer seen as the end of life.”

Hala took up her camera and started some photo sessions with friends, slowly but surely her reputation grew and she now works as a professional photographer. She now earns a living from the photos she takes.

Life has not been easy for Samina. Her mother passed away when Samina was 15, after her final exams in the 10th grade her father had her married off. Her first child was a daughter and this angered her husband, he wanted a son and became violent towards her. She continued to face physical abuse from her husband. When she gave birth to another daughter, her husband reacted by having a second marriage. After sometime, he passed away and it became difficult for her to pay rent, she was forced to move to single-roomed accommodation.

Samina’s children were sick, her own health was deteriorating, and she didn’t have any source for income. She provided some private tuition in her neighbourhood and the same time started studying again. After graduating, she began teaching at a local school, the wages were low but they allowed her to cover the basic needs of her family.

Islamic Relief (IR) helped alleviate some of her burdens by sponsoring her daughters. Samina took on the role of group leader of an Orphan Guardian Group (OGG) formed by IR. It provided her with an opportunity to reach out to disadvantaged women. She listens them and helps the fins solutions to the problems they face.

A few months later she gave birth to another daughter, her tribulations made her frail and on one day her husband forced his way into her home and stole all her belongings. Samina, did not give up her struggle for a better life.

“Facing every kind of violence and discrimination from early marriage to my second marriage, I did not quit and stood up again and again.”

With the help of IR, she opened a tuition centre in December 2017.  It started with 10 students and now it has 32 students enrolled.

The difficult economic conditions of the population in Gaza Strip have led many women to seek jobs to  their families live a decent life.

Last year, 41 women worked to initiate the first Palestinian company run by women to produce date paste which is used for making cookies and pastries.

Om Ismail Abu Mandeel, 45 years old, supports an eight-member family. She is one of the founders of the company. She starts her daily routine at 4am, and she attends her work place at 7am every day.

“Every one of us has her own story of struggle that makes us strive to meet the needs of our families. For example, I could pay for the university tuition for two of my children by the earnings of my job, and when they will finish studying; I will pay for the other two.”

The process of making the date paste is very exhausting for the women, especially because they do not have enough greenhouses that contribute to drying the dates quickly.

“When we got funding from Islamic Relief to develop our small project, we were able to establish two greenhouses and we started using them to dry the dates. The assistance from Islamic Relief was crucial, all the women here are happy and grateful that we got it.”

“We no longer have to wait a long time to dry the dates, we are drying them in just half a day, which has helped us to produce more quantities of date paste in a short time. Thanks to Allah, we are no longer losing large amounts of dates as we were before. The women have become more comfortable.”

Last year the women were able to produce 25 tons of date paste last year, this year they expect to reach 40 tons.

“We still need to buy refrigerators, and we have a great ambition to develop our production lines to be able to produce multiple varieties of cookies and sweets using the date paste produced here. Thus, we can employ more women.”

“We feel very proud when we see our national product in the markets. All of the working women feel pride and happiness owing to the results of their hard work. Confidence has returned as they haev been able to improve their economic conditions.”

Shefaly, has one son and one daughter. After her husband passed away, she struggled to survive. She started doing some tailoring work in order to earn some income, but it wasn’t enough to provide clothes, educational materials and medicine for her children.

Many days passed where her family did not have any food, her children would ask her for food but she couldn’t manage to provide any for them. Her community and relatives avoided her in case she asked assistance from them. In 2015, Islamic Relief (IR) came to the district in which she lived and she was able to apply for assistance.

“This is a turning point in my life. We were able to form a self-help group and Islamic Relief provided us with support and increased awareness in the areas relating to social, health and familial skills. They helped with skills training, supported the development of individual business plans, applications for grants and linked us with different governmental service providers. We formed a union and  Women’s Self-Help Forum to protect our rights.”

“In 2016, I started different income generating activities like tailoring, chicken and duck rearing, goat rearing, cow rearing as well as paddy cultivation by renting land. I overcame my family’s poverty this year.”

Shefaly is now seen as shining example in her community. She was able to overcome poverty and difficulty, she now looks after her own farm, puts her children through school, and assists other women in her local area.

Mr Shashi Mohan, a local from the same village as Shefaly stated:
“After her husband’s death she worked in other people’s houses, agricultural fields, tailoring, and sometimes sought assistance from community people in order to earn her food. Now she has a cow, a goat, chickens, an agricultural field and irrigation pump. She can earn good money to manage her family expenses as well as contributing to other women’s development by providing advic and assistance. She is a shining example to the rest of our community.”