Protecting children living on the streets in Pakistan

HomeNewsProtecting children living on the streets in Pakistan

Children forced to live or work on the street are at grave risk of abuse, violence, disease, trauma, addiction, and exploitation. In addition, many do not access education, making it even more difficult to change their situation.

According to the records of the government of Pakistan, more than 1.5 million girls and boys in the country are currently living or working on the streets, with many civil society organisations believing this figure could be as high as 2.5 million.

Islamic Relief is running a long-term, multi-year programme called the Protection of Children at Risk (POCAR) and is currently in its third phase. The initiative includes a range of evolving objectives and activities, with a broad scope, supporting many of the most vulnerable street children and their families in Pakistan. We have recently completed phase two of this project, which served as an important bridge between the first and third phases. The programme has now entered its third, longest and most robust phase.

So far, this project has greatly improved the wellbeing of children forced to live or work on the streets. During the second phase of the project alone , we have improved access to quality education for children living or working on the streets of Rawalpindi and Islamabad, Pakistan. The intervention focused on improving their wellbeing, while providing an environment in which they can access free education. Measures included providing livelihood opportunities, counselling, and protection services.

Islamic Relief has also improved basic education schools. Specifically set up for children living on the streets, they are not currently part of the formal education system. We provided them with items such as stationary, uniforms, sports materials, lighting, furniture, and water dispensers.

Islamic Relief then worked with the local government to launch an enrolment campaign in collaboration with parents and communities, to help ensure as many children as possible would benefit. In total, 750 children have now enrolled and are benefitting from these improved schools.

As part of the project, we also provided business grants, livelihood training and tailoring kits to children’s families. This has meant that the 94 families involved in the scheme have been able to establish small tailoring businesses and now have a reliable source of income. This has helped ensure children do not need to return to working on the streets, and are able to continue with their education.

Seven-year-old Fatima lives in Rawalpindi. She has three sisters and one brother. Sadly, Fatima’s mother died and her father could not afford to support the family, instead putting them in the care of his relatives. Fatima moved in with her uncle, whose financial condition was poor, and so he was unable to send her to school. Instead, Fatima would sell corn on the streets to help the family.

Fatima has always wanted to attend school, but had been unable to do so. She used to see other children going to school while she was working, and wished to be able to attend school herself. It always made her feel sad, but she kept on dreaming.

We worked with Fatima’s uncle, who agreed to enrol her in school. Islamic Relief collaborated with the Punjab Literacy and the Non-Formal Basic Education Department to get her into a local school.

We also gave her books and stationary to help with her studies. She is now much happier now she is attending school, where she’s gaining a good education and has made friends. 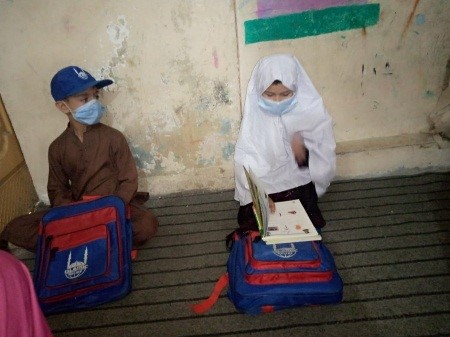 Working with government bodies, children’s families, employers and wider society, so far the project has benefitted over 1,400 people and the third phase of the project is continuing to help to keep some of Pakistan’s most vulnerable children safe.

Please donate now to help us continue vital work in Pakistan and beyond.