Recovering from life-changing injuries thanks to Islamic Relief in Yemen

People who have sustained life-changing injuries in Yemen’s brutal conflict are receiving the help they need, thanks to an Islamic Relief project.

The war in Yemen, now in its fifth year, has led to the world’s worst humanitarian crisis. Hunger is common, water is scarce, and essential services including healthcare are on the brink of collapse.

As part of Islamic Relief’s extensive emergency response, we are supporting three physiotherapy and prosthetic centres in Sana’a, Taiz and Aden. The centres help people to recover from injuries or live with lifelong conditions. We are providing help with maintenance, materials and financial support for staff – as well as badly needed prostheses and paralysis devices.

Shot in the head but now on the road to recovery

Sadeq Bajash al-Ameri, 36, used to earn a living selling mobile phone accessories and computer hardware. He was heading out of Taiz city to sell his goods to traders, when fighting broke out on the road. 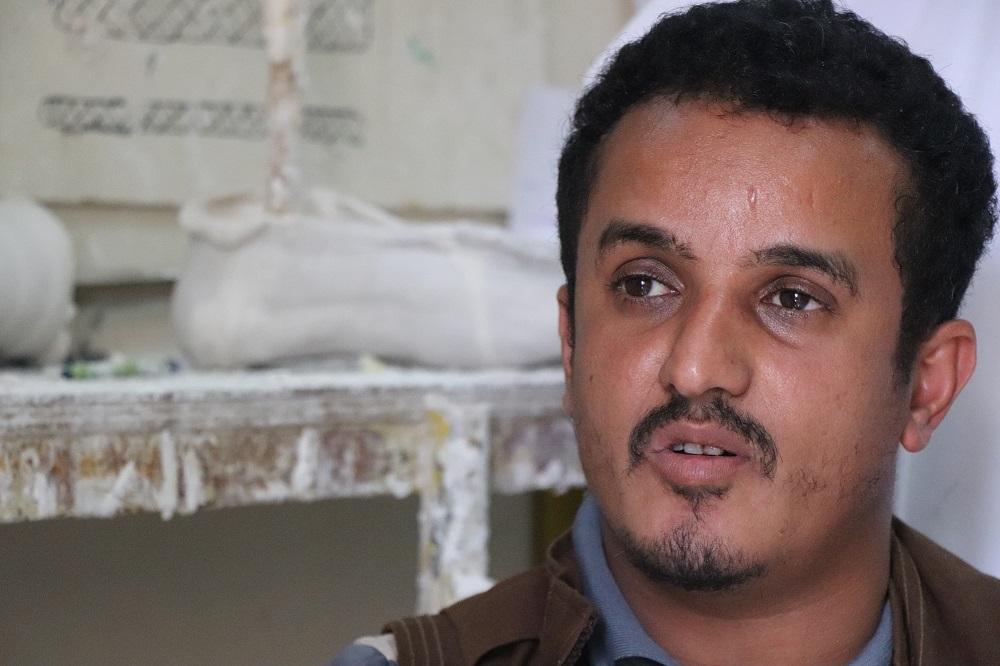 “I was on a bus with other passengers,” recalls the father-of-five. “The driver was shot and killed, so we could not flee the area. Amid shouting and terror on the bus I was holding my goods on my hands.

“A few minutes later, some passengers were killed and others injured, including me. I only remember the death of the driver because he was the first victim inside the bus. When a bullet hit my head, I fell unconscious and I was taken to hospital.

“I was in a coma. After one month I recovered consciousness and I was shocked that my left hand and leg were paralysed and I am stammering when I speak.

“Afterwards I was unable to work, and my family became dependent on charities to help us with food and health care. I needed intensive physical therapy, ointments, and medicines.

“Islamic Relief provided me with splints to my leg and hand, physical therapy, medicines and crutches. I am optimistic about the future, I hope that my leg and hand became better so I can get back to work.”

The project is helping Saleh al-Taweeli to recover from his injuries.

Saleh al-Taweeli, 20, is also being helped by the project after being hit by shrapnel last year. His leg, spine and hand were damaged, leaving him disabled. The physiotherapy and prostheses center in Sana’a has helped him on his journey to recovery.

“Three months ago, I came to the physiotherapy and prostheses center, and I have been receiving psyiotherapy for the nerves of my leg and my spine,” Saleh says. “I was unable to walk but the center helped me with crutches and trained me to use them. This helped me to walk and depend on myself.

“Praise be to Allah, there are major developments in my health and I am feeling better. The disability does not hinder me in my everyday life anymore.”

Islamic Relief has been on the ground in Yemen throughout the conflict. We are doing all we can to ease the suffering through an extensive emergency response that last year alone helped over 2.6 million vulnerable people.

The war in Yemen has affected 80% of the population – and there is still no end in sight. With your support, we can continue to provide the lifeline that the people of Yemen so desperately need.