The moral and economic imperative for conflict prevention is clear, but much more is needed

HomeBlogsThe moral and economic imperative for conflict prevention is clear, but much more is needed This International Day of Living Together in Peace, Islamic Relief’s Dr Sylvia Brown examines the devastating impact of conflict and makes the case for greater investment in conflict prevention.

When our news feeds are filled with stories of human suffering amidst war, many people ask, “Why can’t people just live in peace?” Over the last decade this refrain has become common, as violent conflict within states resurges and increasingly spills across borders. 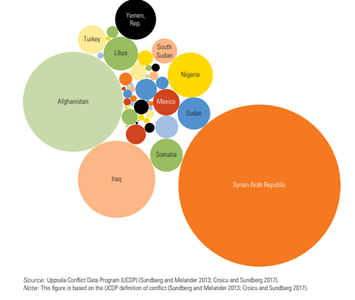 Spread of conflict-related deaths worldwide, by country in 2016

Why is there so much conflict?

If your Lord had pleased, He could have made all people a single community, but they will continue to have their differences… (Qur’an 11:118)

Some conflicts – like those in Yemen and Afghanistan – are dominated by powerful states fighting to gain political, economic or ideological dominance in their region.

Others resemble a post-colonial hangover as newly independent, fragile states struggle to control the people and land within their new national borders, or unite disparate ethnic groups around a common idea of the nation. Electoral processes that result in a ‘winner takes all’ situation also generate electoral conflicts, such as in Kenya, as do humanitarian disasters and pandemics like Covid-19. 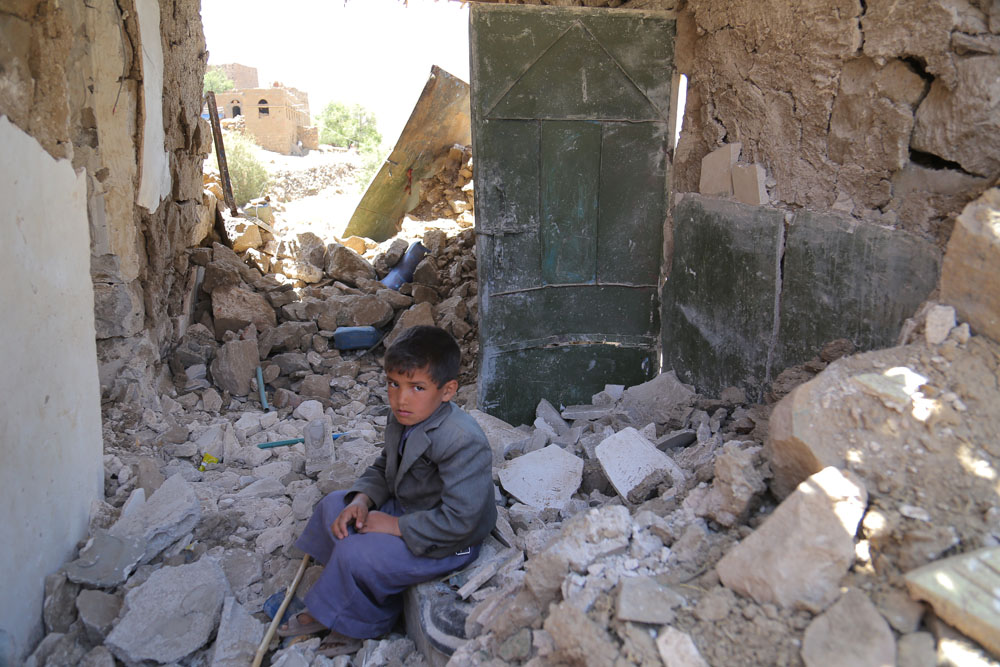 A boy in Yemen in the remains of his family home destroyed by bombing, 2015

Since the end of the Cold War, capitalist transformations around the world have triggered enormous change in ideas of land ownership, prompting conflict over who owns and gets access to farmland, grazing land, valuable forest resources and strategic trade routes. Armed groups now proliferate in many countries. Many become so intertwined with globalised, transnational war economies that their leaders, associated politicians and crony businessmen amass substantial wealth whilst the people under their control sink deeper into poverty. These conflicts turn into complex, protracted crises which are more difficult to resolve the longer they last.

According to the UNHCR, in 2020 over 80 million people were living as displaced people, as a result of persecution, conflict and human rights violations. Meanwhile, conflict or insecurity have left 77 million people acutely food insecure. 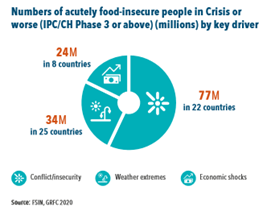 The cost of responding to this huge humanitarian caseload is staggering and unsustainable, making conflict prevention a humanitarian imperative. 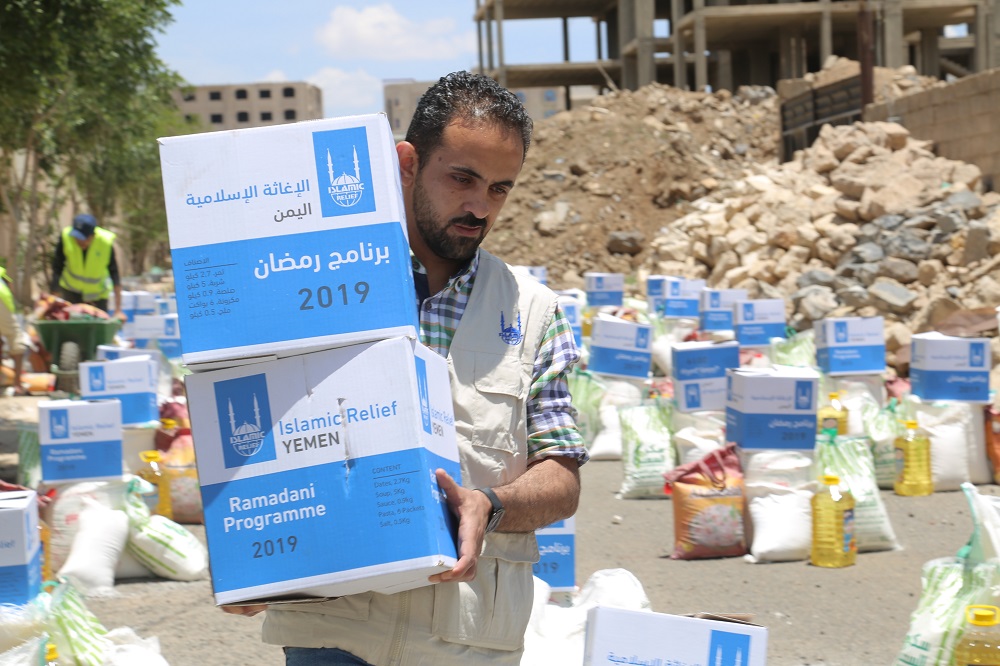 The economic impact of conflict

The impact of violence and conflict on the global economy is extraordinary. Conservative estimates place the cost at US$14.4 trillion a year in 2019, or US$1,895 per person on the planet, according to the Institute of Economics and Peace. And this does not include the costs of domestic violence and crime, or the knock-on effects of conflict, such as reduced foreign investment and tourism. Reducing the cost of violence by just 2% would cover all of the amount spent on overseas development aid in 2019. 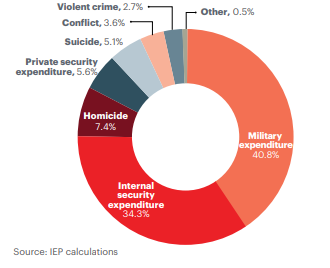 The United Nations emerged out of the ashes of World War II to prevent inter-state conflict and better manage disputes between nations. While these multilateral organisations have been effective at managing inter-state conflict, they have had far less success in managing conflict within states.

Conflict management has been a central feature of organised societies for as long as humans have lived in groups. Clans, tribes, villages and other communities all around the world have their own, well-established mechanisms for managing disputes and balancing competing interests. Most of the time these work well, but sometimes they do not address grievances effectively. 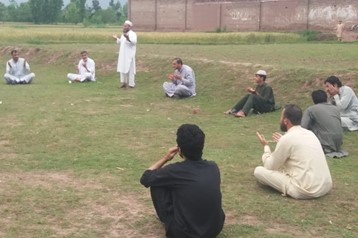 In most places, governments are recognised as primarily responsible for managing competing interests, protecting citizens and ensuring people’s rights are respected. But families, traditional leaders, local faith leaders, women’s groups, youth groups and other locally influential people can also play a role. They can prevent local participation in violence, mediate between groups, and resolve local disputes.

…God guides to the ways of peace those who follow what pleases Him, bringing them from darkness out into light, by His will, and guiding them to a straight path. (Qur’an 5:16)

With our local reach, trust and acceptance in hard-to-access areas, Islamic Relief supports local level dialogues and grassroots peace initiatives. We don’t tell people which side of a conflict to be on, which ideology to adopt, which politician to trust or what a fair solution to a dispute is.

Instead, we support peaceful, inclusive locally-driven efforts to negotiate fairer, sustainable, resilient societies amid and after conflict.

In the Philippines we have supported women and youth activists to enhance the official Bangsamoro peace process with village-based community peace activities. We have also trained village dispute resolution officials so that they are more effective mediators between disputing parties. 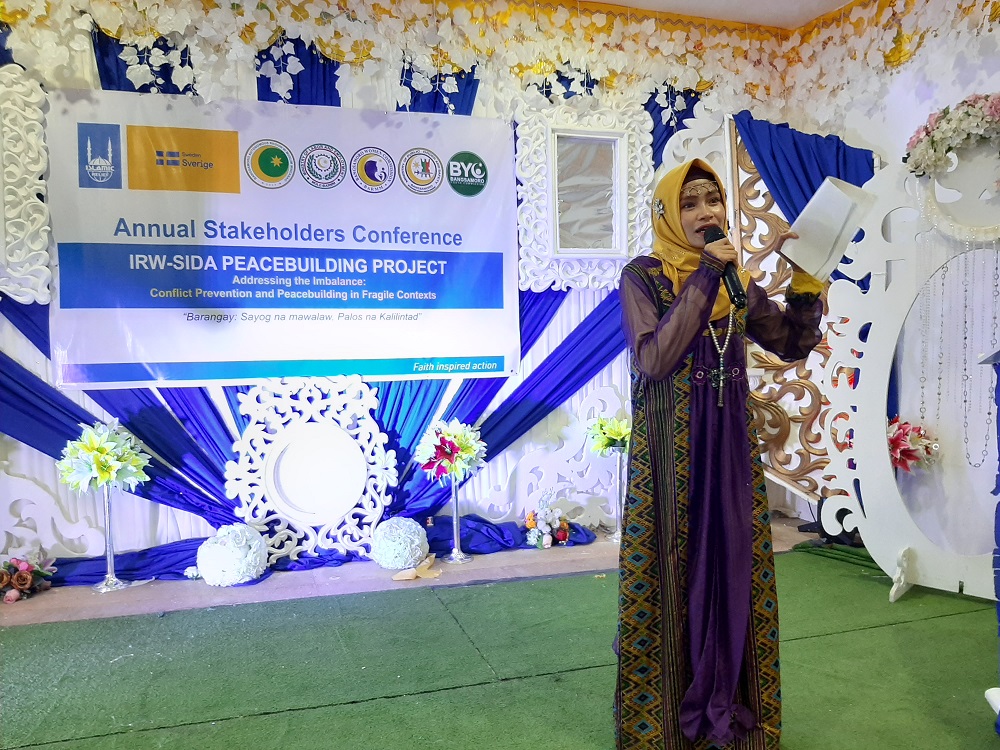 A community peace and development facilitator supported by Islamic Relief, the Philippines, 2021

In Kenya’s Mandera County, we have worked with the Somali clan system to advocate for greater inclusion of women and youth in clan dialogues. Meanwhile, village organisations and youth groups trained and supported by Islamic Relief in Pakistan have helped to resolve local disputes over land, water, coal mines and marriage contracts.

Islamic Relief works with local Muslim faith leaders on conflict prevention, resolution and reconciliation. In Mali and the Central African Republic this has involved inter-religious dialogue between Muslim imams and Christian pastors. 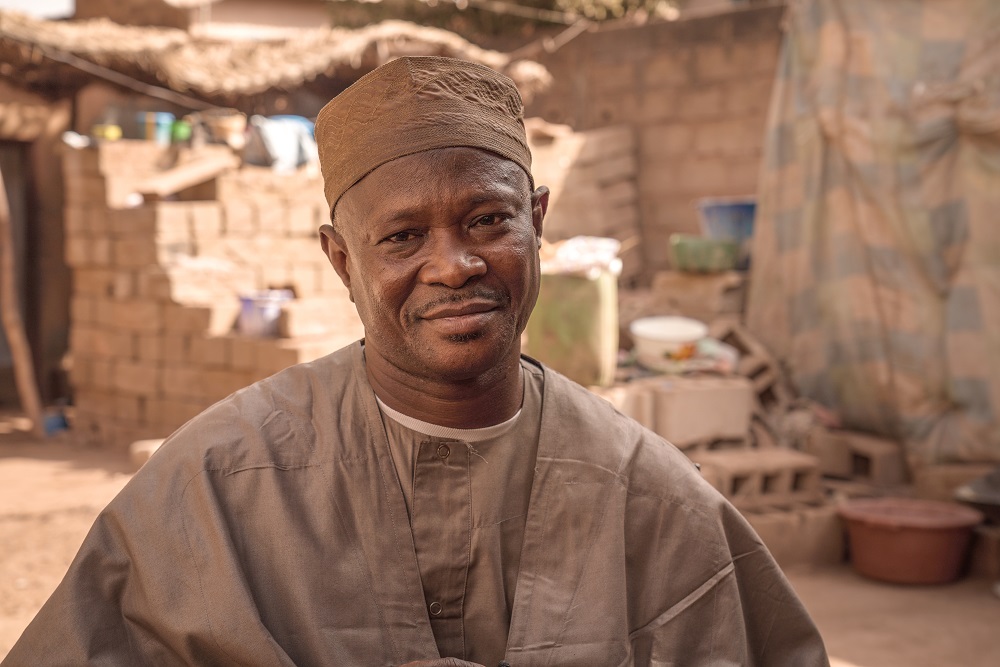 Our support to communities helps build bridges between local groups, manage local disputes and prevent communities from being exploited by conflict actors.

Often, we combine this with practical assistance in other areas to help people meet their immediate needs for food, shelter, water and viable livelihoods. This is because people have interconnected needs, all of which need to be addressed to enable both peace and development to prosper. 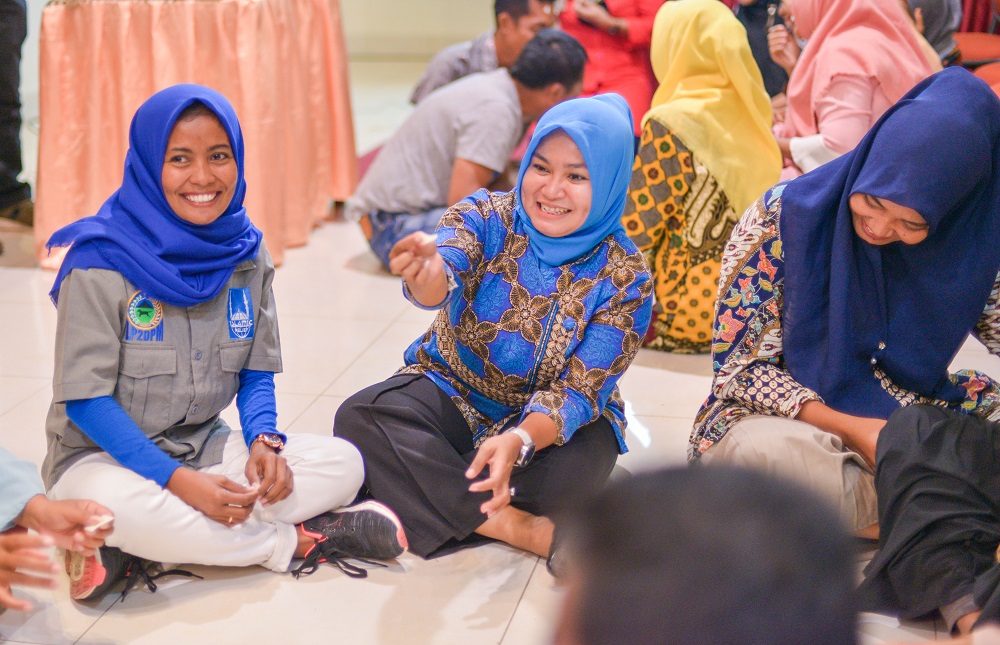 Conflict prevention is a moral imperative, but it is also cost effective

We have a duty to address social injustice, violence and abuses against the rights of vulnerable people to ensure everyone can live their lives freely and peacefully.

But alongside this moral imperative there is an economic case, with huge long-term benefits for countries affected by conflict, which outweigh the costs. Investment in conflict prevention is estimated to save between US$5-70 billion per year on peacekeeping, lost GDP, lost lives and humanitarian assistance. And each year needs less investment while generating ever greater benefits. 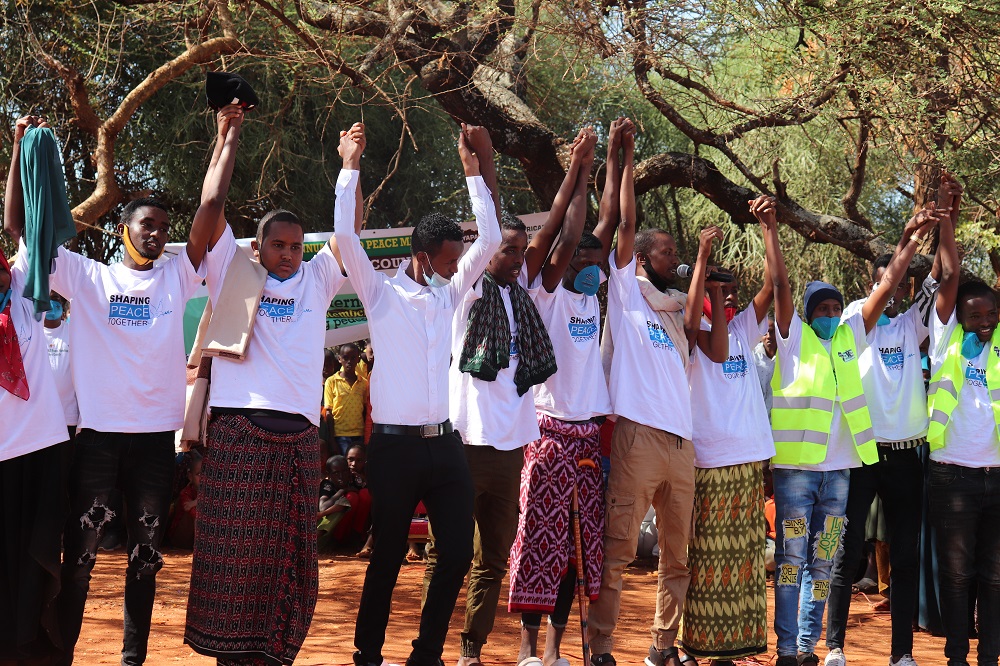 Young people in Kenya participating in a peace talent show, 2020

The case for conflict prevention is clear. Yet it is often quite intangible: when it is successful, nothing is seen. There are no pictures of destroyed villages, traumatised populations and war injuries, only everyday images of people going about their daily lives in peace. This can make it difficult for charities to mobilise funds for conflict prevention.

Islamic Relief will always assist people in the gravest of humanitarian crises, but with your support we will also be there to try and prevent those crises from overwhelming people in the first place.

Conflict prevention is not just an efficient and effective use of your donation, it also saves millions of people from the trauma of war, loss and suffering – costs that are impossible to quantify. And if conflict does break out, we will still be there to help people recover, rebuild their lives and find peace again.

O humanity! Indeed, we created you from a male and a female, and made you into peoples and tribes so that you may get to know one another. Surely the most noble of you in the sight of Allah is the most righteous among you. Allah is truly All-Knowing, All-Aware. (Qur’an 49:13)