Islamic Relief tricycle ambulances can mean the difference between life or death in South Sudan – as Akec found when bitten by a poisonous snake. 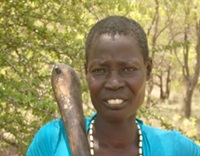 Living in the rapidly expanding Mangateen camp – currently sheltering 17,500 individuals, who have been relocated from the UNMISS ‘Protection of Citizens’ camp – Akec Akueiwut faced daily hardship. There are only 40 emergency latrines, which were installed by Islamic Relief, serving the entire camp. Unable to wait in the lengthy queue for the facilities, Akec ventured outside the camp to relieve herself. There, she was bitten by a poisonous snake. Hearing her cries, other camp residents ran to help, summoning a tricycle ambulance – one of two provided by Islamic Relief.

The three-wheeled vehicle rushed Akec to the camp’s medical clinic, which we support with essential medicines, medical equipment and training, as well as referral services. There, she received urgent treatment before the tricycle ambulance whisked her to hospital, some nine kilometres away.

“The lady could have died had it not been for the Islamic Relief tricycle ambulance,” explained Dr Abraham, who serves at the camp clinic. “Her body had been paralysed and we had no other way to transport her to Juba teaching hospital.”

Mangateen camp’s medical clinic, which is supported by Islamic Relief.

Akec has since made a full recovery and has returned to the camp, where Islamic Relief is also providing health education to help displaced families to keep safe. In addition, we provide health services in two other areas of Juba, a county in which cholera cases have risen as the cost of clean water escalates.

As South Sudan marked the fourth anniversary of its independence earlier this month, it remained locked in a major humanitarian crisis. Protracted conflict has displaced around 1.6 million people within the world’s newest nation, whilst hundreds of thousands have fled the country.

As well as health and sanitation projects, our emergency response to the crisis has also included food distributions and food security support for older people, as well as lifesaving items such as mosquito nets.