HomeBlogsTragedy and hospitality: Daily life with refugees from Tigray

Islamic Relief’s Aya El Fatih spent a few days with a refugee family in Sudan, to find out how people live after fleeing terrible violence. In their small tent she found stories of loss, resilience, hospitality and hope.

The white tents in Um Rakuba refugee camp are arranged in neat rows as far as the eye can see. Thousands of refugees have fled the violence in the Tigray region of Ethiopia and sought shelter in this sprawling camp in eastern Sudan.

One of the many tents, not far from Islamic Relief’s office, is now home to 35-year-old Akbert and her children.

Back home in Ethiopia, Akbert lived happily with her husband, who was the family’s main breadwinner. But their life changed as the war in Tigray intensified. Her husband was killed and his livestock was stolen. The next day Akbert had to bury his body and start caring for their 7 children on her own.

Thinking of her children’s safety, Akbert decided to flee. “It was God’s will,” she says. “I was worried about what was going to happen to us, whether we were going to live or die.”

Akbert and her children crossed the Blue Nile River and escaped into Sudan, where they were welcomed by local people who helped them ride a tractor the rest of the way to Um Rakuba camp.

Making a new home in the camp

In the camp, Akbert’s 3-year-old daughter, Radyet, is very attached to her mother and follows her around everywhere.

Akbert has had to cope with new surroundings and feed her children with whatever is available. “I was very scared when I first came here,” she says. “I worry about my children when I run out of food, how can I explain it to them? We are adults so we understand the situation, but they are only children. The water is also scarce in the camp. I have to go a long way to get water.”

When she wakes up every morning, she cooks food for her children and sends them to school, but she faces difficulty cooking because she doesn’t always have firewood.

With her neighbours, Akbert shares a clay stove where she makes Injera, traditional Ethiopian flatbread, which is an integral part of their diet and a taste of the home they left behind. The refugees have made the clay stoves themselves so they can make Injera.

Even though her tent is a small place for 8 people, Akbert manages to keep it organised and gives it warmth. She throws some incense (commonly used aromatic wood in Ethiopian and Sudanese culture) into flaming coals. A beautiful scent soon saturates the tent as a wisp of smoke rises from the hot coals. The smell often tempts neighbours to join Akbert for coffee in her tent. 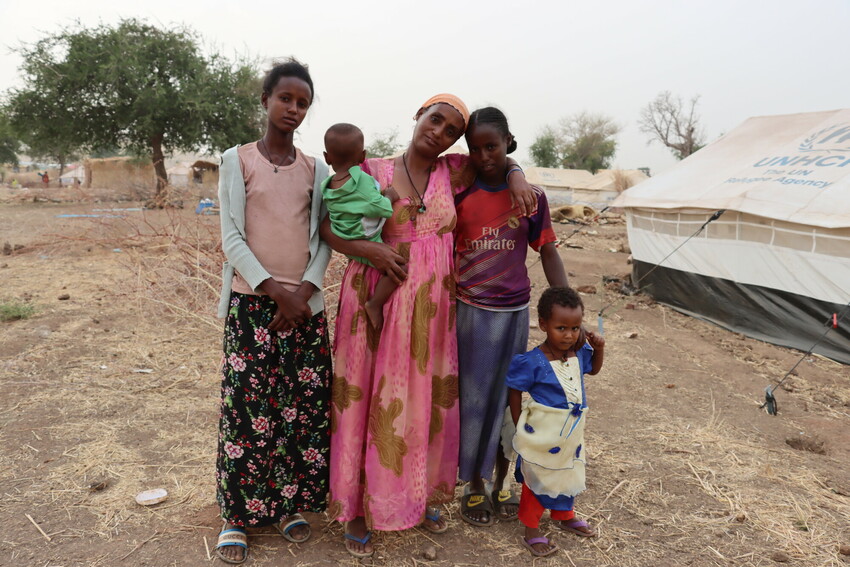 She starts preparing the coffee by roasting the beans in a fryer, stirring until they turn a dark rich colour. With a mortar and pestle she then grinds the roasted beans into a powder, which she adds to boiling water.

She hosts her neighbours by pouring the strong-smelling coffee into small porcelain cups and serving it with popcorn in her warm, incense-saturated tent.

People in the camp do not have much, but hospitality is a big part of local culture and they share what they have with each other.

A birthday in the camp

Her neighbours and her late husband’s friends also came to celebrate the first birthday of her son, Tamasgn. Since her husband passed away, his friends have kept Akbert company.

Many refugees had to leave everything behind when they fled, including clothes. For her son’s birthday Akbert wore a yellow scarf and a half-sleeve maxi pink dress, which she has worn continuously for several days.

Faith is a big part of Akbert’s life. She wears a cross on her neck and goes to church 3 times a week in the camp. At the birthday celebration, Akbert and her family stood reverently around the holy bread while a priest recited prayers. He then attached the bread to Tamsagn’s body, blessed him and cut the bread, which was eaten by everyone present.

“This is part of our culture,” says the priest. “This ritual is usually performed on a child’s first birthday so that he or she grows faster.”

Tamasgn’s birthday coincided with a day of national celebrations. In the camp, refugees gathered for morning prayers in high spirits, walking around greeting everyone they meet. Music played loudly and people stood on tractors holding flags and dancing.

Children were happiest of all, with flags painted on their faces.

Akbert rushed inside to get the bread which was blessed for Tamasgn’s birthday, then shared it around. The people on the tractor hailed and raised the bread high above their heads. Akbert tearfully joined in the dancing, as she remembered her husband; the bread she donated was for his soul.

For Akbert and many other refugees in the camp, such celebrations can be a way to temporarily detach themselves from tragic memories.

Since violence broke out in Tigray in November 2020, more than 80,000 Ethiopian refugees have fled to Sudan.

Some refugees are able to make a small living by selling vegetables and sugar in the market, and Akbert plans to sell a tractor to raise money to feed her children.

However, the need for humanitarian assistance is greater than ever.

Islamic Relief is working in Um Rakuba and other camps in Gedaref state in eastern Sudan. We have provided around 30,000 refugees with some form of assistance including food, water, sanitation and hygiene, education, and a new solar-powered lighting system to keep people safe in the camp at night.

Islamic Relief has constructed around 50 latrines and 30 washing facilities in the camps, and is constructing classrooms through support from Education Cannot Wait.

But families like Akbert’s need more support so they can live a dignified life.

“My children are orphans,” she says. “I pray that they don’t get hungry or sick. I thank Islamic Relief and the government of Sudan for the support so far.”

Islamic Relief has been responding to forced migration crises since we were founded in 1984. We are now working to meet the needs of refugees, internally displaced people, asylum seekers and returnees in affected countries around the world.

We urgently need your help to continue this vital work: please donate to support our crucial work with refugees and migrants.