Turning up the heat on climate change

Ahead of a key climate summit in New York, Islamic Relief has pushed world leaders to agree ambitious action to reduce emissions and boost climate resilience – and increased understanding of Islamic perspectives on environmental protection.

At a three-day ‘Religions and the earth’ conference – which began on Friday – our Senior Adviser on Environmental Sustainability addressed delegates on faith based approaches to climate change and safeguarding the planet. In his speech, Dr Muhtari Aminu-Kano drew on our work on Eco Islam and our work in vulnerable communities across the globe.

The conference linked to Islamic Relief’s extensive programme to influence a sustainable post-2015 development agenda, which includes emphasis on environmental sustainability and action on climate change through the Beyond 2015 campaign.

Islamic Relief also teamed up with other civil society organisations as a partner in the People’s Climate March. Mobilising scores of volunteers, Islamic Relief USA joined over 400,000 people in taking to the streets of New York city on Sunday to make a stand for a greener world.  Those marching against climate change and in support of Islamic Relief included Imam Zaid Shakir. 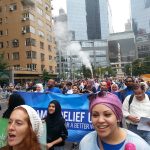 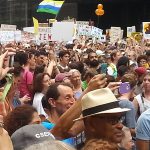 Over 400,000 people of all faiths and none took the streets of New York city as a show of solidarity in the largest ever climate march of its kind. 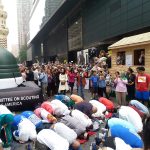 On-street prayers were followed by an interfaith service attended by the US Vice President and the UN Deputy Secretary General.

One of thousands of events taking place worldwide, the largest-ever climate change march in history was a show of solidarity, and saw Islamic Relief coming together with other faith groups through the Our Voices Coalition and Green Faith contingency. It culminated in an interfaith service attended by Vice President Al Gore and Deputy Secretary General of the UN, Jan Eliasson.

The massive march successfully caught the attention of world leaders, urging governments to support a challenging global agreement to cut global warming pollution. It also brought together faith leaders to ratchet up the pressure before the one-day climate summit at the UN Headquarters.

For many, the event was also an opportunity to learn more about why taking care of the Earth – and other people – is important to Muslims.

The following day, Islamic Relief welcomed delegates to our special UN side event, to explore Islamic approaches to environmental sustainability. The workshop discussed the foundations for environmental stewardship in Islam, as well as practical approaches in Islamic traditions.

In addition, it examined how Islamic methods and tools are ensuring that renewable natural resources are used wisely, and also saw the Reverend Fletcher Harper of Green Faith sharing insights from the Christian perspective.

Climate change and environmental degradation typically hits the poorest communities the hardest. As a result, Islamic Relief prioritises environmental protection in its advocacy and its work on the ground, which includes projects to empower vulnerable communities to protect themselves from the impact of disasters and to safeguard the environment.