Why humanitarian intervention in MENA must change

The Middle East and North Africa region, the cradle of peace and civilization, is in a profound state of tumult. Conflict and insecurity have created staggering socio-economic consequences. This now calls for a whole new approach to humanitarian aid and development, says Dr Mohamed Ashmawey, CEO of Islamic Relief Worldwide.

Many prophets – including Abraham, Jesus, Moses, Aaron, John and Mohammed, peace be upon them all – came from and passed through the region. They all came to guide people and spread love and peace. Yet today, the Middle East and North Africa region is being torn apart by conflict. The challenges facing the humanitarian sector have never been greater. 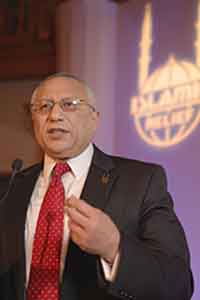 Islamic Relief Worldwide CEO calls for a sea change in humanitarian intervention in the Middle East and North Africa region.

Islamic Relief is at the forefront of the response to many of the crises in the region. Our emergency operations in Yemen aim to assist more than 700,000 people, as the conflict worsens an already grave humanitarian crisis. Amid the fighting, even simple things can be the difference between life and death. Previously, whole families would attend food distributions, but now we allow only one nominated person to attend. This reduces the number of people travelling, who could become casualties. As fuel supplies run out, we are using cooking gas to deliver food – though stocks are now running low.

We are also responding to the nuanced and far-reaching impact of the Syrian crisis, which has created a human and economic catastrophe with security implications for the whole world. By 2014, Islamic Relief had spent over £122 million on humanitarian programmes for those affected, reaching more than seven million vulnerable people. Deep inside Syria, our focus is on life-saving aid such as food, shelter and medicine.

Our projects for refugees in neighbouring countries include longer-term interventions such as education and psychosocial support. As well as assisting Syrian refugees in Iraq, our life-saving operations are also helping families caught up in conflict inside Iraq. Last year alone, we spent $3.8 million to meet the basic needs of 378,000 internally displaced Muslims, Christians and Yezidis.

Naturally, the sole purpose of emergency interventions is to provide short-term relief. Even before Yemen’s current crisis, some 10.5 million people in the country were in urgent need of food aid. But humanitarian organizations could only meet the needs of one million individuals. The international media on the whole continues to under-report the crisis, adding to the challenge facing humanitarian actors in securing support for those suffering in the country. However, we were able to begin an ambitious £2 million programme to ease the food crisis and to enable Yemenis – especially young people – to build sustainable livelihoods. Alongside humanitarian relief, we want to see the international community increase investment in development programmes like these, as they are undeniably one of the key ways to tackle the root causes of poverty and conflict.

Islamic Relief has been delivering life-saving humanitarian aid for over 30 years. We are humbled by the generosity of our donors, as we work to broaden our reach and increase our impact in these turbulent times. Alongside other humanitarian organizations, we are now being challenged as never before, with an unprecedented number of major crises in the Middle East and North Africa region competing for the attention of the international community.

Funding shortfalls for humanitarian programmes in Syria and elsewhere must be urgently rectified.

Resources are limited. Too often, crises that seem too difficult to resolve fail to secure much-needed public attention and many remain chronically under-funded. The Syria Humanitarian Assistance Response Plan for 2014 had a funding shortfall of 52 per cent. The World Food Programme has once more been forced to scale back its support for Syrian refugees.

The UN Office for the Coordination of Humanitarian Affairs in Iraq has warned that nearly two-thirds of emergency operations could be closed or cut back unless more funding is made available. So far, just 10.1 per cent of the Strategic Response Plan for Yemen is funded.

Humanitarian needs are growing and deepening. The scale and depth of suffering caused by conflict in the Middle East and North Africa is hard to comprehend. Many millions of people have been affected, with needs across all sectors and untold numbers of individuals facing uncertain futures as the fighting rages on.

Fresh momentum is needed to address acute funding shortfalls and other barriers preventing aid from reaching those most in need. Innovation is critical to enable the delivery of effective and efficient programmes in complex conflict zones. The international community must act urgently to end the violence and to restore peace in the region. To do so, we must boost investment in long-term solutions – particularly in education, economic empowerment and skills – as well as meeting immediate needs. Building a vibrant and empowered civil society that unlocks human capital and nurtures local talent, alongside inclusive and sustainable development, is absolutely critical.

As a mosaic of religious and cultural diversity, the Middle East and North Africa region resonates with many of us. The region is hungry for lasting peace as well as aid and development. Together, we can make it happen.

This article was first published by The World Economic Forum on the Middle East and North Africa ahead of its annual meeting last week.