World Vegan Day: what is the case for eating less meat?

HomeBlogsWorld Vegan Day: what is the case for eating less meat?

A vegan for three decades, Martin Cottingham reflects on increasing awareness of the benefits of eating less meat – and why it is relevant to Islamic Relief.

World Vegan Day, November 1, is not necessarily an event you would expect a Muslim organisation to pay much attention to.

But as a vegan of 30 years standing, one who has worked for Islamic Relief for nearly a third of that time, I see a growing awareness in the organisation of the environmental benefits of eating less meat in a world ravaged by climate change. And so I have gladly accepted my colleagues’ invitation to write a blog on the issues.

My own journey to veganism began at university in the 1980s, when I adopted a vegetarian diet. I was active in a student movement called Third World First – still going strong today as People and Planet. Thanks to Third World First, I became acutely aware of the negative impact on poorer countries of unequal terms of trade and the environmental problems caused by western patterns of consumption.

I had three main motivations for going vegetarian. One was animal welfare, not wanting to be part of the factory farming of livestock. Another was my own health and well-being, wanting to move away from a diet high in saturated fat.

The biggest factor of all was ecology – ensuring the best use of resources to feed a fast-growing global population in a grossly unequal world, without upsetting the balance of nature and ruining the environment for future generations.

From vegetarian to vegan

A couple of years later I decided to go fully vegan. A passionate campaigner for the cause persuaded me that veganism would be the most complete dietary expression of my animal welfare, health and ecological values.

What was a distinctly unfashionable diet 30 years ago is now growing rapidly. The Vegan Society reports that interest in veganism increased sevenfold in the 5 years between 2014 and 2019, according to Google search trends. It now gets almost 4 times more interest than vegetarian and gluten-free searches.

So what is the case for a plant-based diet, what is its relevance to Islamic Relief, and how does veganism sit with the Muslim faith and the meat-rich diet favoured by many Muslims?

Research from Oxford University published in 2016 found that a global switch to diets that rely less on meat and more on fruit and vegetables could save up to 8 million lives by 2050, reduce greenhouse gas emissions by two-thirds, and lead to healthcare-related savings and avoided climate damages of $1.5 trillion.

The projections for lives saved are very compelling, and the climate dimension is particularly significant. Global warming is in danger of spiralling out of control and the poorest countries are already bearing the brunt of this – yet contributing least to greenhouse gas emissions. Land that was previously productive is being turned to desert, while droughts and floods are increasing in frequency and severity.

Islamic Relief is on the frontline of helping the communities worst affected, and in the forefront of campaigning for reductions in emissions that will save lives and protect threatened livelihoods.

Meat production and consumption require 2.5 times more energy, 2.9 times more water, 13 times more fertiliser and 1.4 times more pesticides than a vegetarian diet. For the planet to stand a chance of surviving, a 40% reduction in meat consumption in developed countries has been urged by a study published by medical periodical The Lancet, down to a maximum 90g per person per day. 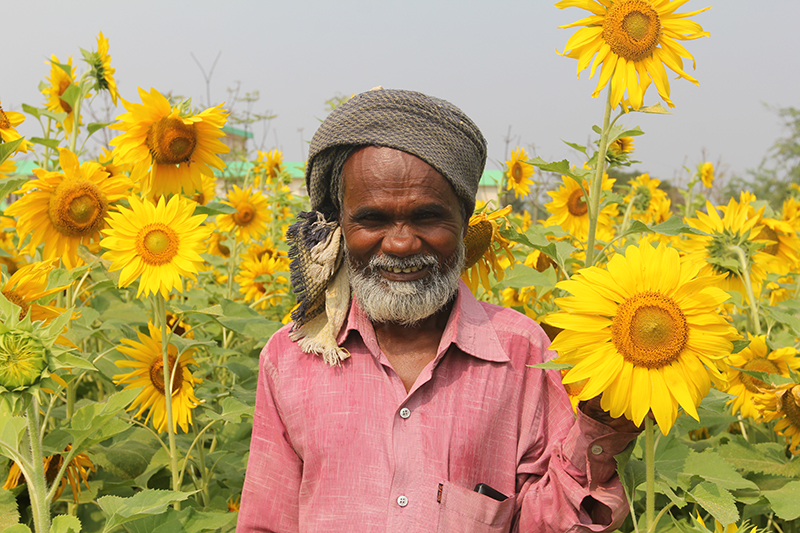 Local people in Satkira, Bangladesh, are growing sunflowers through an Islamic Relief project to help them adapt their livelihoods to climate change challenges.

It is appropriate, therefore, that Islamic Relief’s environment policy stipulates that “all meals or refreshments paid for by Islamic Relief for internal staff meetings, lunchtime events or external meetings during working hours [should be] meat-free”. The policy adds that in the longer term “all food and beverages purchased…for staff and guest consumption [should be] organic, Fairtrade, locally sourced and/or seasonal (where available)”.

Far be it for me as a Christian to pronounce on how reducing meat consumption sits with the Muslim faith. But I am indebted to colleagues who have shared thoughts on the subject with me.

I was particularly taken with a paper on Islam and Consumption, written for Islamic Relief by Martyn Rush and published by our Humanitarian Academy for Development. Rush argues that just because something is halal, that does not mean it is tayyeb. In other words, just because it’s permitted and lawful, it doesn’t make it good or virtuous.

Rush struggles to see the current pattern of meat consumption as a good thing in the climate context. He argues that in a world afflicted by mass malnutrition and “buffeted and assaulted by the effects of climate change”, we need to ask “whether meat can be tayyeb, whether it can ever be sustainable for the mass market of billions”. He adds that in terms of the maqasid priorities, “it is life itself that is under threat, and must be protected against mere preferences or lower order lifestyle choices”.

World Vegan Day, and the World Vegan Month it kicks off, is a good time for us all to re-evaluate.